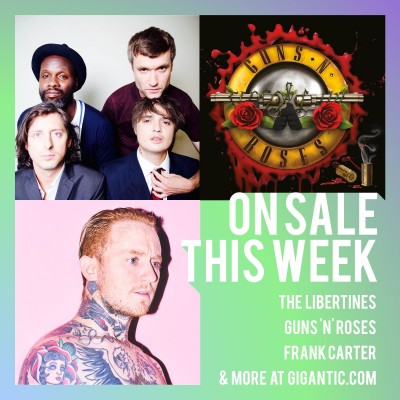 Taking place on the fourth weekend of July, Tramlines offers a wide range of genres and boasts such big names as Primal Scream, Kano, The Libertines, Metronomy and many more!

Get ready to sail the good ship Albion, The Libertines have just announced a major headline date for Live From Times Square in Newcastle. With rumours the boys will soon be returning to the studio, this may be your chance to hear some new material being played live.

The outdoor event sees them supported by Maximo Park plus Blackwaters and promises to be the perfect time for heroes to enjoy a hot August evening.

The Libertines tickets are on sale right now.

The world-renowned Shrewsbury Folk Festival offers a wonderful weekend of leading folk acts that draws some of the biggest names to please everyone attending.

The festival is more than just music, however. Not only are there shops to browse and great places to eat, there is also a craft fair to enjoy, a dance tent plus events especially for youth and children meaning there is something for the whole family.

There is no bigger band than Guns N’ Roses. With songs like Welcome To The Jungle, November Rain and Sweet Child o’ Mine, they epitomise drugs, sex and rock n’ roll and have sold a staggering 100 million records worldwide.

Now reunited with original bassist Duff McKagan and lead guitarist Slash, they have announced two nights at The London Stadium in June. Having sold 2 million tickets in 2016, you will need to be quick as they will sell.

With the recent release of the album Modern Ruin, Frank Carter & The Rattlesnakes have announced a December tour to promote the new material. The record sees Carter take an introspective look at the relationships in his life and, mirroring the strife of refugees around the world, how he may be turning away those he is responsible for hurting.

Mary J Blige is the latest artist announced to join the many astonishing headliners hosted by Kew The Music. The R&B singer is responsible for such hits as One, Family Affair, Not Gon’ Cry plus Be Without You which has led to her taking home a staggering nine Grammy Awards. Tickets have just come on sale.

We always have the best tickets in town. Other shows going on sale this week include:

East Bay’s finest punk trio Green Day take over Hyde Park to play music from their new album Revolution Radio plus selected hits. They are joined by Rancid, Gogol Bordello, The Hives, The Living End and many more!

Taking place at the idyllic Henham park in Suffolk, Latitude is a family friendly festival which offers music, comedy stages, theatre and live poetry. This year they are joined by The 1975, Mumford And Sons plus Fleet Foxes.

Gigantic always has something for everyone, so make sure you check out these family friends events:

Drawing on elements of post-punk and garage rock to create furiously fast yet feel good anthems, Vancouver two-piece Japandroids are the ultimate party band. Having recently released their third record Near To The Wild Heart Of Life, they now tour the UK in May.

Auckland alt rock band The Veils have just announced a handful of headline dates. Songwriter Finn Andrews taps into electronica and folk to create stunning pieces of work which always enthral the critics. Last year saw the release of forth album Total Depravity.

And finally, Gigantic always offers you a wide range of essential gig tickets. Take a look at the best of the rest: