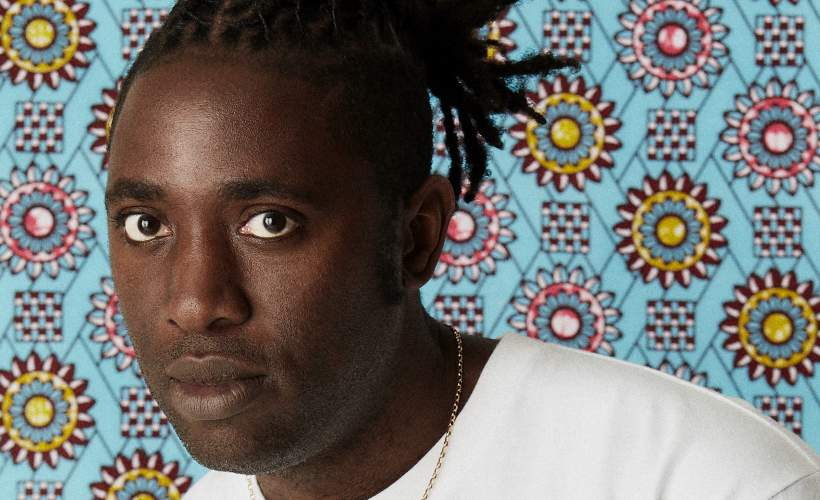 But, leading busy lives it is easy to forget that Kele tickets will become available at 10:00 on Friday 15th of November. So, set a personal reminder with Gigantic so we can alert you with an email or text message just before they are released.

Kele Okereke has never been one to shy away from politics. His work with Bloc Party, as well as his own output - most recently his highly acclaimed 2019 musical, Leave To Remain - has grappled with everything from government corruption to sexual and racial identity. So it should come as no surprise that Kele’s fourth solo album is his most political work to date - not least given what he describes as the “morally bankrupt time” we are living through.
Titled 2042, the record takes its name from a projection made by the Census Bureau in the United States a few years ago - 2042 is the predicted year by which ethnic and racial minorities will have become the majority. “That idea is seen as worrying in right wing discourse,” explains Kele, “But I wanted to counter that - if the face of the world is changing, I personally think that could only be a good thing. There will be more voices, and a redressing of power - I wanted to explore that idea that the genetic make-up of the people who hold hegemonic power will inevitably change.”

Released via Kele’s own KOLA Records label, which falls under independent label group !K7, 2042 finds the artist excited for a set up that gives him the freedom to do things entirely on his terms. Lyrically he is more forthright with his meaning than ever - which in part, he says, comes from having had children. Whereas his last album, 2017’s largely acoustic Fatherland , found him readying himself for fatherhood, 2042 lands following the birth of his second child. He says, in retrospect, it felt jarring doing interviews about family life to promote that album, given the political climate: “I was talking about something internal and peaceful set against a backdrop of Trump’s America and Brexit - it was a frightening time, so it was weird talking about what I had done, rather than discussing my nervousness about where we were heading.”

Accordingly, it’s back to electronic urgency and, more so than ever, putting down his experiences of Black Britishness. “I wanted to counter the bile, and create a record that prepared my children on some level for what they might experience in their lives,” he says, “Something that gave them some sort of tools to defend themselves.”

This means there are tracks like ‘Natural Hair’ - a lithe, melodic song about two black boys in love, which he notes shouldn't be seen as radical representation in 2019, even though it is - and ‘Cyril’s Blood’, in which he imagines what life might have been like for his grandfather back in Nigeria, over a pounding beat. In fact, in thinking about legacy, Kele’s also been thinking a lot about his West African heritage on this record: he’s holding a photograph of his grandparents in the album’s artwork, ‘Jungle Bunny’ leans into Afrobeats sonics, while the soft and jaunty ‘Ceiling Games’ references an intimate scene from one of his favourite novels, Chimamanda Ngozi Adichie’s Americanah.
Another book that Kele highlights as having inspired 2042 is Derek Owusu’s SAFE - a recent collection of essays reflecting on the experiences of Black British men. Although the album does make reference to African American culture (there are references to Kanye, and “Saint” Colin Kaepernick), Kele has felt a lack of representation of the British experience. His latest work is accordingly inspired by a new wave of culture that seeks to remedy that - a wave he feels has given new language to a younger generation to better consider their identity (“that wasn’t there when I was younger”). It means there are references to the Grenfell fire tragedy and the Windrush scandal, alongside lighter nods to pirate radio station Kool FM and UK garage raves.

Nonetheless, he’s aware that his audience largely comes from a different demographic who might not be so au fait with the issues he wants to talk about: “Traditionally the indie rock world is quite white, so I’m aware that this is a different perspective for a lot of people who would normally like my music. But that doesn’t matter to me - I have a voice that people listen to, so I need to use my platform to talk about what I see in my life, or in the life of my friends and family. The time for complacency is gone, really, and these conversations need to be brought to everyone’s attention, not just people of colour.”

Coming together to build something new is a central theme to this work - taking inspiration from African American sci-fi writer Octavia Butler as well as Afrofuturism, Kele considers the concept of marginalised people taking matters into their own hands, and starting over. Indeed, it’s the urgent rawness of ‘Let England Burn’ that Kele feels is the centrepiece of the record. “I feel like it’s where I’m the most critical on the album,” he says, “I guess it’s this idea of burning the past away, or burning down institutions. I love my life in Britain, but Brexit has stoked divisions and this ugliness about immigration and identity has come to the surface. It's hard to say with confidence that I feel proud to be British.”

And through burning the old, Kele comes to rebirth, through a lens of spiritualism nodded to in the album’s artwork via the tarot card aesthetic and the butterfly that floats above his hand, as well as in his lyrics. “After watching Michael Robinson's visionary short film These Hammers Don’t Hurt Us , I was obsessed with this idea of trial, judgement and reincarnation. That’s where the three sections of ‘BETWEEN ME AND MY MAKER’ come from: life, death and rebirth, like the metamorphosis of a butterfly.”
Kele’s fourth album is his most multifaceted work to date: consolidating all the solo work that has come before, he melds genres in a way that sounds more confident than ever, while pushing forward in the canon of protest. The message here is one of disrupting systemic repression, of shedding light on stories that lay untold; but also, it’s one of celebration. 2042 is a record that looks forward to that point where Kele’s identity and his children’s identity, aren’t all things to be innately politicised, but instead are just soft, intimate normalities.