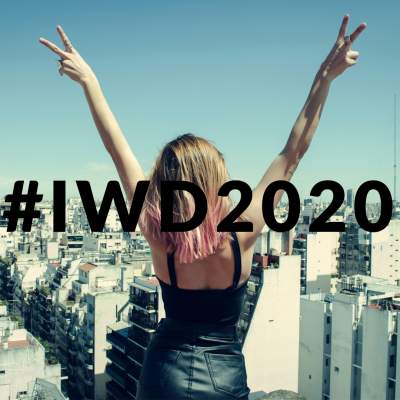 Happy International Women’s Day to all you badass ladies out there!

It’s fair to say that 2019 really was the year of Lizzo. She absolutely smacked us in the face with some female empowered lyrics that made us toss our hair back and strut our way into any difficult work situation or relationship drama, shouting “Feeling Good As Hell!” at the top of our lungs.

If you were one of the lucky ones to be in the crowd at Glasto, where she had thousands of people praising her as she danced around in a wedding veil, you will agree with me that it’s one Glasto moment you will never forget.  If you miss it, check it out below. I promise your day will improve tenfold.

The 18-year-old ‘bad guy’ singer was chosen to join an array of prestigious female artists such as Tina Turner, Adele, Carly Simon and (of course) Shirley Bassey, in performing the newest James Bond theme tune. Making her the youngest performer to sing and write the title track in the 50-years of the franchise.

'No Time To Die' was written with her brother and music collaborator Finneas. The forthcoming No Time To Die film is set to release in April 2020, featuring Daniel Craig’s fifth and final time as 007.

The announcement of Shakira and J Lo to perform at the Superbowl half time show was a win on so many levels - defying preconceptions on gender, race and age in music. Shakira actually had her 43 birthday on stage this year! J Lo also shared the stage with her daughter Emme who sang a couple of lines of The Boss’ Born In The USA, while Shakira slayed the drums.

Let’s be honest, women should always headline the half time show. Don’t believe me check out some of the best…

So this is a little bit of an old one as we already have 2020 inductees - which includes the much loved and dearly missed, Whitney Houston.

However, this is a goodie... Stevie Nicks was inducted in the Rock Hall of Fame for a second time. Nicks is the first woman, the first member of Fleetwood Mac, and the 23rd artist in Hall of Fame history to be inducted twice!

Ohh how we love you, Stevie.

Last year welcomed Janet Jackson too, who also headlined the Pyramid stage in 2019... at the same time as Lizzo might I add. Easily one of the worst classes in Glasto history.

This last year was pretty full-on for Swifty, she received the artist of the decade award at the American Music Awards (AMAs), she released her Miss Americana doco on Netflix and she also, not only took on the man, but she also beat the man and stuck it to him as well!

She found herself stuck in a contractual dispute with her former record label over some of her old hits. Rather than this being resolved by legal teams, behind closed doors, it resulted in a very public #IStandWithTaylor twitter campaign trending worldwide. The story has a lot of ups and downs. Ultimately show won this round, albeit, we imagine there will be more to follow.

What seems like a lifetime ago now, 30 years olds around the globe screamed with delight. They dusted off their best pair of Kappa trackie poppers, put their hair in bunches and prepared to see the women that ignited the Girl Power phenomena.  An evening of friends hugging (and in my case, hugging anyone that would hug me) and swaying, singing along to the plethora of bangers. Viva Forever, ladies. Viva Forever…

Let’s finish with this remake of Wannabe

Check out some of the amazing female artists we have on sale - keep on supporting women in music.