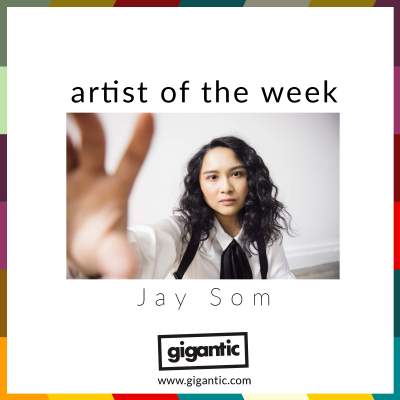 Songwriter Jay Som (AKA Melina Duterte) occupies her own sonic space, creating her own unique take on dream pop and shoegaze. Her cult following first began with posting demos which created a real connection with listeners, drawn to the intimacy of her songs and the nature they are crafted in her own bedroom studio. This fanbase continues to develop and has helped her grow from modest indie success to verging on breaking through into the big time.

California songwriter Melina Duterte was born in the Mid-90’s as the daughter of Filipino immigrants, living in the largely middle class suburb in the East Bay of Walnut Creek. She began writing and recording in her childhood, penning songs as early as 12 years old. Initially working on trumpet and guitar, she set herself the goal of getting into a program specifically for developing talents as a jazz player before opting to study at community college instead. There, she was able to learn the production skills she would adapt in her own bedroom studio and be able to pioneer a sound of her own.

Duterte began posting her tracks on Bandcamp, originally under the name Untitled before adopting the stage name Jay Som. As her online submissions became more popular, she began to attract label interest and signed to Topshelf for the release of her debut album ‘Turn Into’ in 2016. This significantly raised her profile and she then signed to Polyvinyl for another re-release in the same year.

Her second album ‘Everybody Works’, released in 2017, would prove to be a true masterpiece and saw Duterte praised by the likes of Pitchfork, Clash and Rolling Stone who all listed it in their round up for Best Album of that year. Alongside the critical acclaim, ‘Everybody Works’ was her first commercial success so far by reaching No. 17 on the US Heat chart.

In 2019, Duterte dropped her latest LP ‘Anak Ko’ which translated from Philippian native dialect Tagalog means ‘My Child’ and was inspired by the letters and correspondence shared over the years with her mother and shot to No. 2 on the US Heat chart – her biggest hit so far.

Whilst writing the new material, Duterte reached her mid-20’s and found herself reflecting on the past, her position in the world and her relationships with others – particularly family. It prompted her to place herself in isolation at a Joshua Tree solo retreat where she rapidly wrote the record in just a week. This reflective mood can be heard in the music which shows tremendous growth as she draws parallels to her mother with her development both as a woman and a musician, and how her song writing is also a form of birth and nurture.

“In order to change, you’ve got to make so many mistakes. What’s helped me is forcing myself to be even more peaceful and kind with myself and others. You can get so caught up in attention, and the monetary value of being a musician, that you can forget to be humble. You can learn more from humility than the flashy stuff. I want kindness in my life. Kindness is the most important thing for this job, and empathy.”

Whilst there is certainly a mature element to ‘Anak Ko’, Jay Som’s youthful optimism still shines through as heard both on record and at her live performances. Make sure you don’t miss your chance to see her when she arrives in the UK later this month on tour – tickets available with Gigantic right now!