Catfish and the Bottlemen, Def Leppard, Madness, Britney Spears, Shakira and much more on sale this week 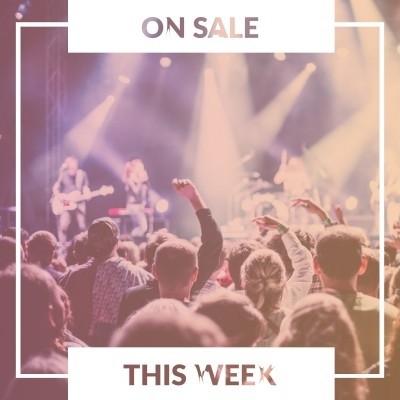 Catfish And The Bottlemen punctured the popular consciousness with their platinum selling debut album ‘The Balcony’ in 2014 which was soon followed by ‘The Ride’ two years later, forever positioning them as one of Britain’s leading guitar bands.

They have now been confirmed as the third headliner for All Points East Festival and take over Victoria Park on Friday 1st of June. Expected to sell very quickly, set your personal reminder with Gigantic right now!

Catfish And The Bottlemen tickets are released at 09:00 on Friday.

Hard rockers Def Leppard burst out of Sheffield to become the multi-platinum selling band who changed the sound of metal. They are just about to release tickets for ‘The Hysteria Tour’, so make sure you set your personal reminder with Gigantic right now!

Def Leppard are released at 10:00 on Friday.

Led by Suggs, 2 Tone champions Madness have been a household name for over forty years producing such hits as ‘One Step Beyond’, ‘Baggy Trousers’ and ‘It Must Be Love’. The perfect summer band has just announced a series of outdoor shows across July 2018.

Madness are released at 09:00 on Friday.

There can be few bigger names than Britney! After becoming world famous with the release of ‘…Baby One More Time’ in 1999, Britney Spears has subsequently sold over 100 million albums worldwide. Join her for her ‘Piece Of Me’ tour which reaches the UK this summer!

Britney Spears are released at 10:00 on Saturday.

Shakira tickets are released at 09:00 on Friday.

Britain’s best loved cheeky chappies Kaiser Chiefs continue to be best sellers with the release of each new album and pack out venues whenever they play. Join them for the extraordinary outdoor event Live In Somerset, taking place at Vivary Park in Taunton on Saturday 15th of July. Kaiser Chiefs tickets are released at 10:00 on Friday.

Unknown Mortal Orchestra have just teased their fans with the prospect of a new album later this year by releasing brand new single ‘American Guilt’. They have also just announced a headline show at Roundhouse in London in addition to headlining Strange Waves in Manchester. Unknown Mortal Orchestra are released at 09:00 on Friday.

Gigantic understands the pressures of modern life and it can be easy to miss out. So, set a personal reminder so we can alert you with a text message or an email just before tickets for your favourite show are released.

With new shows being added all the time, it makes sense to keep checking with Gigantic. Just look at all these new releases available on our site this week:

The Isle Of Wight plays host to some of the biggest stars of the most decadent of decades. Jack Up the 80s Vol. 6 includes performances from T’Pau, Leo Sayer, Chesney Hawkes and many more!

Jack Up the 80s tickets are currently available.

Nottingham’s music community comes together to form Beat The Streets. The festival aims to raise funds and support for the cities homeless and features a stunning line up.

The many unique venues of North London unite for Camden Rocks 2018. PiL, Twin Atlantic and Maximo Park lead hundreds more bands and acts for an unmissable day of music.

Curated with your little people in mind, Gloworm Festival offers stimulating activities, fun adventures and great music for all the family to enjoy.

Garage rock band Hinds are often cited by critics as one of their top picks. With the impending release of their second album ‘I Don’t Run’ later this year, they leave their Spanish homeland to play Electric Brixton in London on Thursday 19th of April.

Join ice skating legends Torvill and Dean for Dancing on Ice 2018. The live show travels round the UK and stars the Olympic champions plus a wide selection of your favourite celebrities and professional skaters as featured on the popular television series during March and April.

Gigantic is always the best place to come to enjoy a wide selection of essential gig tickets plus benefit from the advice from our dedicated customer services team. So, always check our site whenever you are looking to book your big night out and you could be enjoying exciting events like these: