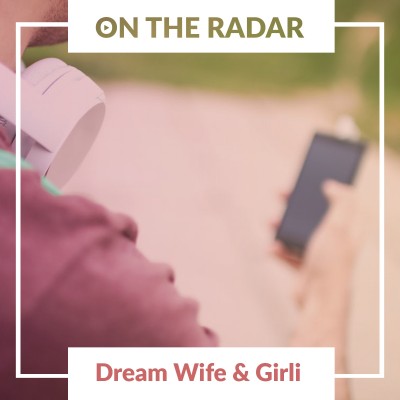 Dream Wife have certainly made an impact in a short time. Having first formed as an art school project in 2015 whilst studying in Brighton, the now London based trio Alice (guitar), Bella (bass) and Rakel (vocals) understand the power of visual impact and have decked out the stages of their gigs with incredible handmade sets and props to accompany their addictive new wave informed indie rock.

Having built up a cult following through blistering performances and with the release of their extended plays ‘EP1’ and ‘Fire’; Dream Wife are looking like early contenders for Album-Of-The-Year with their highly anticipated first album which is launched at the end of this week. Reported to veer wonderfully from furious rage to politico-pop, the album starts with the track ‘Let’s Make Out’;

"It’s a commentary on the objectification of women; the 1950s American Dream stereotype package, having the dream house, the dream car, and the Dream Wife. We want to flip the script on that. Women aren’t objects; we don’t just fit into one mold. At the start, we joked around calling each other our wives, but by supporting one another, celebrating achievements together and finding strength in female solidarity we’re reclaiming the concept of a ‘wife’. Being in a band is a marriage in itself.”

You can catch them at Bristol Exchange and Heaven in London during March where they will be showing off their new material. Tipped as some of the biggest gigs of the year, be sure to book your ticket before they are all snapped up.

Girli is the DIY punk electronica work of Milly Toomey. The previous Young MP for Camden has always had a passion for politics, with workers and women’s rights being central to her actions before making the complete leap towards music.

Drawing on the bubble-gum sweet agitational energy of late 90’s disco feminist punk whilst applying a bit of grime attitude and aesthetic, Toomey’s music is all about the struggle young women face, yet loaded with humour. Initially terming her sound as ‘Bratpop’, Toomey dropped the tag after discovering problematic sexist perceptions to her own description.

“I started realising, more and more, that people used the fact that I say what I think to say that I was a bit of a bitch, or call me a brat, and that really annoyed me. The word ‘brat’ is always used for women. If a guy speaks out he’s confident or rock’n’roll and rebellious. If a girl speaks out, she’s a brat or a bitch, or she’s spoilt. So, I stopped calling it that.”

Last year saw a flurry of activity including the release of her ‘Hot Mess’ EP which featured the sardonic titular single which is sure to fill indie disco dancefloors for a long time to come.  It also features the newly released song ‘Mr 10pm Bedtime’.

Recounting wild times from the past and contrasting it with the current constant complaints, ‘Mr 10pm Bedtime’ is dedicated to an unknown flatmate who has become old before their time, choosing early nights over partying. But Toomey isn’t ready to give up on her killjoy roomy yet; “Baby don’t tell me you’re too old to have a little bit of fun sometimes.”

Be sure you catch Girli when she makes headline performances in April.