Bullet For My Valentine, Shiiine On Festival, Whoopi Goldberg, Daddy Yankee and more! 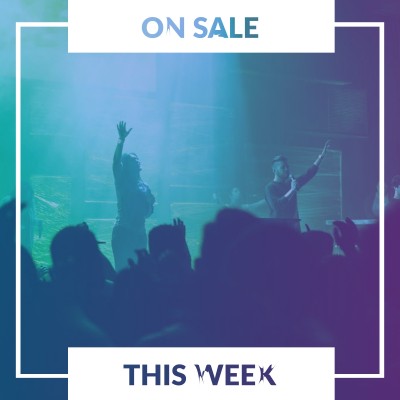 Bullet For My Valentine formed towards the end of the 90’s and have grown to become the world famous metalcore band playing to a vast international audience, selling over one million albums in the United States alone and taking home the Kerrang! Award for Best British Band a staggering three-times.

This year sees the release of their highly anticipated sixth studio album ‘Gravity’ which they showcase at Alexandra Palace in London and Cardiff Motorpoint Arena during November.

Bullet For My Valentine tickets become available at 10:00 on Friday.

Celebrating the best of Britpop, Shiiine On Festival brings such big names as Orbital, Shed Seven, Happy Mondays and Embrace to Genting Arena for one massive all dayer. Tickets are expected to fly off the shelves so make sure you set your personal reminder right now!

Shiiine On Festival tickets become available at 10:00 on Friday.

Village Screen Cinema selects the most interesting and unusual settings to screen cult movies beloved by all. This summer sees them takeover The Peak Cavern at Castleton where you can see The Goonies, Hook, The Descent and Raiders Of The Lost Ark.

The Village Screen tickets become available at 09:00 on Friday.

Handmade is the Leicester festival which always unites the most crucial acts with cutting edge bands and performers. Plus, make sure you get to the conference at the Hansom Hall discussing various aspects of the music industry.

Comedian and Hollywood superstar, Whoopi Goldberg achieved worldwide fame in the 1980’s and has remained as a cultural icon ever since. Gigantic is very excited to be able to offer you tickets to her shows in Leeds and London, where you can see the hilarious stand up perform to a live audience. The Brian Jonestown Massacre are known for their bold experimental rock and their wildly anarchic gigs, marking them as one of the most thrilling bands of all time. Following the release of their latest record ‘Don’t Get Lost’ last year, they head to the UK for an Autumn tour.

The Brian Jonestown Massacre tickets become available at 09:00 on Friday.

We know your life is busy and it is easy to miss out. So, to make things easier Gigantic offers you the choice to place a personal reminder which will alert you with an email or text message just prior to the release of your chosen show.

Award-winning ticket vendor Gigantic has an ever-expanding list of events on offer, with new shows being added every day. Take a look at what is coming on sale this week:

You like your music, heavy, intense and innovative? Then get to County Showground from Thursday 5th till Monday 9th of July for UK Tech Fest where you can see Protest The Hero, Sikth, The Acacia Strain and many more.

Latitude offers a fierce line up which features Solange, The Killers and alt-J for headliners plus live comedy and cabaret. So, get yourself to Henham Park in Southwold from Thursday 12th until Sunday 15th of July.

Moseley Folk Festival offers a wide range of world class acts including Levellers, Teenage Fanclub, Nick Mulvey plus many more when it arrives at Mosley Park from Friday 31st of August to 2nd of September.

Rock And Bike Fest has a loyal returning audience, drawn every year to the great music, tattoo competitions and celebration of biking culture. If you haven’t been before, make this your first year!

Puerto Rican reggaetón star Daddy Yankee (AKA Ramón Luis Ayala Rodríguez) exploded in the mid 90’s and has gone on to enjoy a career which has seen him sell over 20 million records and become decorated with many awards. Currently working on new album ‘El Disco Duro’, he has announced a major London show at The SSE Arena – Wembley for this summer.

Now, Now are the indie rock duo made up of Bradley Hale (Drums) and Cacie Dalager (Guitar, Keyboard) from Minneapolis. The pair are just about to release their new album ‘Saved’ which they promote with a UK tour this month.

You know Gigantic offers you a huge selection of essential gig tickets plus a dedicated customer services team, ready to help you make your selection. This means we are always the best place to come whenever you are booking for your big night out. Check out what else we have on sale right now: