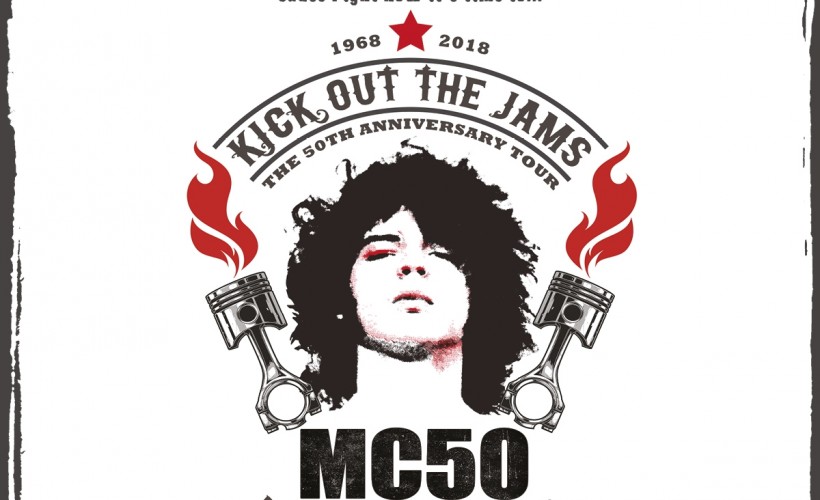 To mark the 50th anniversary of MC5’s iconic debut album, Kick Out The Jams, an all-star band including members of Soundgarden, Fugazi, King’s X and Zen Guerilla will join Wayne Kramer to tour the UK this November, under the name MC50.

These gigs are big news. And as the word spreads, the demand keeps growing so make sure you book your MC50 tickets early as they will be snatched up quickly. We make it easy booking your favourite gig tickets at Gigantic by making our site available 24/7 using your tablet, smartphone or computer.

MC50 tickets are just about to be made available. Set your personal reminder right now so Gigantic can alert you with an email or text message when they go on sale at 09:00 on Friday 4th of May.


Widely regarded as one of the greatest albums of all time, and one of the most important forerunners of punk, Kick Out The Jams has become synonymous with ‘60s counter-culture and revolutionist ideology.

Born in 1964 in Michigan, MC5 only released three studio albums throughout their career including Back In The USA and High Time but the band’s influence on music is unfaltering to this day.

Joining Kramer to perform the album and other classic MC5 tracks will be guitarist Kim Thayil of Soundgarden, drummer Brendan Canty of Fugazi, bassist Dug Pinnick of King’s X and frontman Marcus Durant of Zen Guerilla.

There is only limited supplies on how many MC50 concert tickets we are given from the promoters and so we expect that they will not be around for long. Please make sure you book yours early to avoid being disappointed. Gigantic has been providing you excellent customer service and a vast selection of essential gig tickets to choose from for over ten years, so no wonder we are your award-winning first choice whenever you are looking to book for your big night out.

Make sure you see MC50 in November!

Five great musicians enjoying themselves playing rock plus the bonus of a great support act in M Monroe. Brilliant!

Wayne Kramer and his Supergroup (a term often used but certainly delivered) treated. The crowd to a prime slice of Detroit Protopunk classic hi energy rock. Unmissable gig, Mr Kramer seems rejuvenated and happy. Please let this not be a one off tour, and hopefully an album of new material? This band rocks.

That's all we have for MC50! Check out their upcoming shows