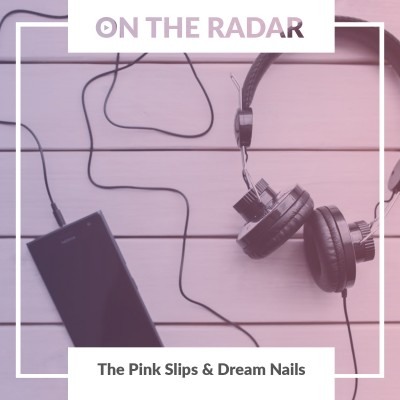 Sometimes a band comes along who are just so effortlessly cool, it makes you sick with envy. The Pink Slips ooze with sleazy sex appeal, distilling all the dangerous rock and roll glamour of their L.A hometown into flawless songs which summon the riotous nature of punk, the hedonism of new wave and the off-the-cuff sophistication of Parisian 60’s pop.

The five-piece are led by Grace McKagan AKA Grave, daughter of Gun N’ Roses bassist Duff McKagan and supermodel Susan Holmes-McKagan who spent her formative years in Seattle rubbing shoulders with true icons whilst feverishly studying what makes them tick.

“I had a lot of time on my own in Seattle when I was young because all my friends were back at home in LA, so I’d read a lot of books. I read ‘Girls To The Front’ by Sara Marcus, which is a book about the girl punk scene in the 90s, like Bikini Kill and all that. I also read Kim Gordon’s ‘Is It My Body?’ and a lot of Patti Smith and Iggy Pop biographies. They all made such a huge impression on me and helped me identify what I wanted to be, as a performer.” - Grace McKagan

While having parents who extend such massive influence certainly doesn’t hurt, it also does not assure with talent or success. However, the band have certainly proved themselves with their debut single ‘I’m Ready’ which is a rallying cry for self-indulgence, the snarling art punk fury of their follow up number ‘Gimme’ and their evocative EP ‘Say L’or Venus’.

“I want my songs to make people excited, to want to dance around, to throw things, to party with their friends, to cry, to feel.” - Grace McKagan

The Pink Slips join the long list of mighty bands and acts playing Download Festival at Donnington Park this summer, but you can also catch them play a warm up gig at The Black Heart in London on Friday 8th of June 2018.

International feminist agent provocateurs Dream Nails describe themselves as ‘punk witches’. Energetic quintet Mimi, Anya, Lucy and Janey combine fiery breakneck-fast riffs with calls for change through their fanzines, with the demand for radical change informing everything they do.

“Anya, Emmett and I met through our involvement in a feminist direct action group, which meant that we’re all pretty loud and share a lot of similar views, opinions and anger. We bonded through that and decided to set up a band!” – Janey

Though a London based band, Janey came to the capital from Reading and Mimi has made an even bigger journey having arrived on our shores from Toronto, Canada. They began to grab attention with wonderfully anarchic songs like ‘Deep Heat’, self-affirming single ‘DIY’ and their ‘Dare to Care’ EP which is the perfect way to make the personal the political at any party. It was the mix of articulate anger and groove which has seen them being featured by the likes of Dazed & Confused, Love Magazine and VICE plus heading out on a tour round Europe with Cherry Glazerr.

“As a woman, punk is a way to express anger about all the violence and bullshit you’re told to quietly swallow for your whole life, both on an individual and systemic level. We started this band because we needed a place to release our anger at the hostile world we live in, and we started playing gigs because we wanted to create spaces for other women to be angry in public. Instead of letting our anger and sadness destroy us from within, we channel it right back at a world that tries to crush us. Women’s anger is so powerful but is trampled on and shamed. When we’re not able to express it, we just end up turning in on ourselves. Being able to express anger, collectively, is a powerful and healing thing. Within the toxic minefield of feminine respectability that women are placed within, punk is a political act.” – Janey

This year has seen the release of their ‘Double A Side’ 7” through Everything Sucks Music which includes the blistering punk rock track ‘Vagina Police’ and ‘Fascism Is Coming’ which swoons deceptively before raging against the oncoming inevitable dystopia which comes about through inaction.

Make sure you catch Dream Nails when they dare to play the Waterfront Studio in Norwich on Friday 13th of July – what could possibly go wrong?