Happy New Year! Check out our picks for 2017 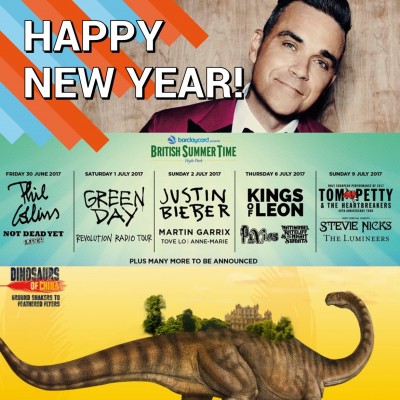 Everyone loves cheeky chappy Olly Murs. He shot to fame whilst competing on the sixth series of hit competition show The X Factor, narrowly missing out on taking the top spot, and became a household name by the time he released his debut single Please Don’t Let Me Go which shot straight to #1. The Essex singer has since sold a staggering 10 million records worldwide.

November 2016 saw the release of his fifth studio album entitled 24 Hrs. The Silver certified record is his fourth album release to rise to the peak of the UK charts and infectious tunes contained plus his incredible voice made it a late contender for album of the year.

Following the release of the chart-topping album, Olly has announced a summer tour for 2017 and is sure to thrill at every performance. Tickets are already selling out so don’t hang around and book yours today!

The summer of months of 2017 look set to be absolutely scorching now that the headline line up for Barclaycard presents British Summer Time have been announced. Get ready to see such huge heavyweight names as Phil Collins, Green Day, Justin Bieber, Kings Of Leon plus Tom Petty & The Heartbreakers.

Each event is taking place in the heart of London at Hyde Park and offers a vast array of support acts, the likes of which would make mind-blowing headline performances by themselves, making for an mesmerising season of memorable historic musical events.

So, look forward to those blissful sunny days and carefree nights by booking your tickets today for some of the world’s biggest names in music.

The idyllic Wollaton Hall of Nottingham will soon be taken over by Dinosaurs Of China! Displaying real life fossils and specimens, some of which have never been seen outside of Asia, the pre-history presentation includes the fully restored skeleton of a Mamenchisaurus which measures as high as three double decker buses and towers over spectators. This will also be accompanied by an exclusive exhibition held at Lakeside Arts.

Fun for all the family, Dinosaurs of China offers a wonderful day out which captures children’s imagination and wonder of a time when massive monsters roamed the Earth and provides all the facts to feeds their ever-inquisitive minds.

Running from the beginning of July until near the end of October of 2017, there are plenty of days to choose from. But don’t hang around because we are taking plenty of bookings right now and each slot will fill up fast!

There are few bigger names in rock than Guns N' Roses. Having shock the world for more than 30 years, the LA rockers have enjoyed a career that has seen scandal, drug addiction and every single excess you can envisage.

Now reunited with their original guitarist Slash, the band which has sold more than 100 million records worldwide boasts a back catalogue which includes such hits as It’s So Easy, November Rain, Paradise City, Knockin’ On Heaven’s Door, Welcome To The Jungle and Sweet Child O’ Mine.

Their 2016 stadium shows sold more than 2 million tickets and now they return to the UK for two nights at The London Stadium in June. With tickets selling out incredibly quickly, now is your last chance to see them storm the stage for yourself.

The new year promises to be an extraordinary twelve months for live music and one of the first major acts to kick off 2017 will be A Day To Remember. After recently releasing new album Bad Vibrations, the pop punk heroes promote the new record with an awesome arena tour this January.

Also, joining the first of the big names to start touring will be Donny Osmond. From his days as a Seventies teen idol to becoming a singing sensation, Donny has grown on stage and in our hearts to become a living legend. He tours the UK in January.

Plus, dark electronic rock band Depeche Mode are embarking on their global tour to promote their brand-new record Spirit. Known for their ultra cool synth based singles, the highly anticipated new record is sure to thrill.

Held in April, the young festival Handmade is one of the first major music events of the year. Because it runs so early in the year and the line-up is typically comprised of rising stars, Handmade is often a true indicator for the musical direction of the coming year and is fast becoming the first choice for those in the know.

So, if you want to get a sample of the sound of 2017 book for Handmade right now. Early Bird tickets have already gone so with limited supplies left you better act fast!

Brought to you by the same dream team behind Tramlines, Outlines 2017 takes advantage of the very best venues Sheffield has to offer such as Plug, The Harley, The Leadmill, Bloc Projects and Queens Social Club.

The city centre festivals debut year offers a huge range of exceptional acts ranging from rock to electro, punk, ska and metal to create one big weekender. Expect to see the likes of Jagwar Ma, The Selecter, Slow Club, The Crookes plus many more yet to be announced.

With the summer months not as far away as you might think, now is the time to start making your festivals plans. We also highly recommend that you check out:

Gigantic proudly offers a wide range of essential gig tickets and we have some great events on sale right now. About to be released are tickets for Los Angeles fusion king Carnage. Known for his intense sets that fill clubs around the world and his superb debut album Papi Gordo, he hits cool London club Heaven in March.

On sale right now we have the Mammoth Jamm feat. The Wytches, God Damn & Wolfgang Flur. Arranged by the ace alternative all dayer CLUB.THE.MAMMOTH, the three colossal gigs are held over consecutive weeks at Brixton Jamm in South London and promise to be absolutely unmissable.

Other amazing acts that you definitely need to see in 2017 include: