The greatest metal band there will ever be are playing their final ever dates. Black Sabbath is embarking on the beginning of The End Tour and closing the doors on their 46-year career. Make sure you are there for Tony Iommi, Geezer Butler and Ozzy Osbourne’s final chapter as this marks The End of the greatest rock and roll stories of all time!

The importance of this band cannot be understated as they gave birth to heavy metal when they were barely out of their teens. They first formed in Birmingham during 1968 after Iommi left his former band Mythology and recruited Butler and Osbourne who had been working in the band Rare Breed after spotting an advert in a music shop that stated “Ozzy Zig Needs Gig - has own PA”.

The band went through a number of name changes including The Polka Tulk Blues Band, Polka Tulk and Earth before finally taking inspiration from the 1963 horror film Black Sabbath. It would also become the name of the title song of their debut album of the same name. Released on Friday 13th of February in 1970, the record hit #8 hit the charts. The band quickly followed with the album Paranoid in September of the same year. Taking influence from the turmoil of the Vietnam War the album would feature their most recognisable songs such as War Pigs, Iron Man and the song Paranoid. It hit #1 and is considered one of the most influential rock albums of all time.

Their success would continue with the release of further classic records including Vol. 4, Sabbath Bloody Sabbath, Technical Ecstasy and Never Say Die! and by 1979 they had sold in excess of 8 million albums. However, the rise in fame or fortune would also see a massive return in cash which would largely be spent on drugs and alcohol which would primarily be Osbourne's undoing leading to him being sacked from the band - only to bounce back with a successful solo career.

Black Sabbath would undergo numerous changes in their line-up and continued to release new studio albums. The three would finally reunite in 1997.

In 2005 they were inducted into the UK Rock And Roll Hall Of Fame, eventually also accepted in the US too, in recognition for their paramount importance to rock by inventing heavy metal.

Black Sabbath tickets will be available online from 09:00 on Friday 17th of June. Be sure to a reminder via Gigantic.com so that you don’t miss out.

The End tour sees Black Sabbath playing an extensive arena tour which is only fitting for the final tour of one of the most important rock bands of all time. They will start at Manchester Arena before moving on to The SSE Hydro in Glasgow and First Direct Arena at Leeds. They play two nights at the monolithic sized O2 Arena before finishing with two nights at Genting Arena in Birmingham - the place it all started.

Concert tickets are always limited so be sure to book early to avoid disappointment.

The band were formed in Birmingham in 1968 by Ozzy Osbourne, Geezer Butler, Tony Iommi and Bill Ward under the name Earth, but soon changed their name to Black Sabbath. Over the years the group have had numerous vocalists following Osbourne's dismissal from the band in 1979, the most notable of which was Ronnie James Dio (Rainbow). It was not until 1997, nearly twenty years later, that the original Black Sabbath line-up was reunited and the band released their fittingly titled live album 'Reunion'. While 'Reunion' marked the return of all four members, there would never be a studio album with all four original members. In 2013 the band did release their first studio album with Ozzy Osbourne since 1978's 'Never Say Die!' titled '13', but the album did not feature original drummer Bill Ward. Following the release of '13' the band won Best Hard Rock/Metal Performance at the 56th Grammy Awards for the album's single 'God Is Dead?'.

Purchase your Black Sabbath tickets below.

Black Sabbath to feature in Series 5 of Peaky Blinders! 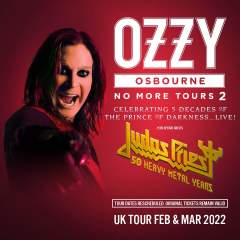 That's all we have for Black Sabbath! Check out their upcoming shows