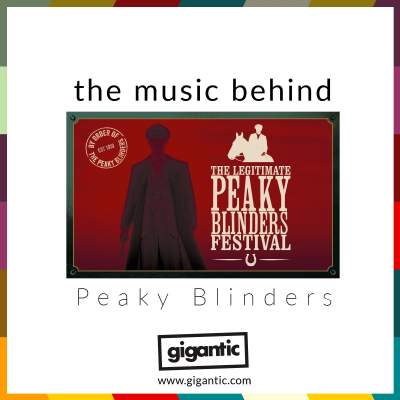 Music plays an integral part of hit period BBC gangster drama Peaky Blinders. The juxtaposition of contemporary songs sound tracking the violent criminal underworld of Birmingham in the interwar years gives the programme a fresh vitality which, if not handled correctly, could so easily be jarring and snap the viewer straight out of enjoying the show. Fortunately, through careful selection by the team behind the programme including creator and screenwriter Steven Knight, starring actor Cillian Murphy and Series 5 director Anthony Bryne, the music re-enforces the dramatic scenes on screen and really allows the viewer to become immersed in the world of Tommy Shelby and his family of outlaws.

Next month sees Peaky Blinders: The Legitimate Festival come to The Digbeth Estate in Birmingham, the home of Peaky Blinders, which is the perfect experience for any true fan and Gigantic has tickets on sale right now.

The festival will have live music across five stages, featuring performances from the legendary Primal Scream, double Mercury prize winner Anna Calvi, snotty upstarts SLAVES, a DJ set from the enigmatic Mike Skinner, compelling songwriter Nadine Shah - AND a very special guest who has yet to be announced!

You will be fully immersed in the Peaky culture, history and fashion with a catwalk show of Garrison Tailors clothing range hosted by Steven Knight, a contemporary dance commission by Rambert choreographed by Benoit Swan Pouffer, a showcase of the official Peaky Blinders collaboration from David Beckham’s British menswear label Kent & Curwen and street entertainment straight from the Birmingham underworld.

Plus, there will be a Q&A with Peaky Blinders creator Steve Knight which features stars of the hit BBC show!

With Series 5 of Peaky Blinders scheduled to return to BBC One at 21:00 on Sunday August 25th, director Anthony Bryne and lead actor Cillian Murphy who plays the lead role of Tommy Shelby and recently was a guest host for BBC 6 Music spoke to Andrew Trendell at NME about the importance of music throughout the hit show and especially in the upcoming episodes.

“You just know when a song is ‘Peaky’. The artists are outsiders. They have resisted the tyranny of the mainstream, shall we say?” – Cillian Murphy

Following the tremendous economic and social turbulence caused by the 1929 Wall Street Crash, Peaky Blinders will now dramatize the clash of ideologies as the ruling classes do all in the power to keep down the demand for revolution and equality by the socialists, and the rising meance of Oswald Mosely’s British Union Of Fascists bringing violence and brutal prejudice to the streets of Birmingham. Trying to put his life of crime behind him and trying to make sense of all the chaos as a newly elected Labour MP, Tommy Shelby discovers his past may not be so easy to escape as he would hope. To further explore his experience, Anna Calvi has been recruited to create an original score ton convey his anguish to the audience.

“The way (Anna Calvi) plays the guitar is very unique, and her voice and the way she uses her breath has allowed us to access the interior world of Tommy’s headspace. She has an innate instinct for those images, and has come up with something that I think is quite extraordinary… There’s an element of violence to her work and it certainly sticks in your head. She’s managed to become part of the images as well. I think it would be difficult to separate.” – Anthony Byrne

From the use of Nick Cave and the Bad Sees ‘Red Right Hand’ as the main theme, contemporary music has been integral to the feel of Peaky Blinders and Series 5 continues to include fresh new talent including brattish duo The Pearl Hearts who Byrne describes as “a band I really like” and Mercury Prize nominees IDLES who fit the coming punk direction described by the director who he wants to give a platform to; “We thought it would be good to put them in a big cultural zeitgeist BBC One show and expose them to a huge audience.”

And how could you set a show in Birmingham and not includes the city’s most famous sons; Black Sabbath? The heavy metal pioneers epitomise the Peaky outsider sound and attitude – listen out for classic hard rock tracks ‘Wizard’ and ‘War Pigs’.