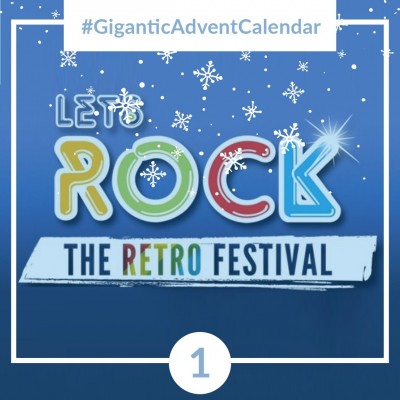 Behind the first door of our #GiganticAdventCalender are the Let’s Rock Festivals.

Celebrating the decadent decade, Let’s Rock is the ultimate retro festival where the biggest pop stars of the era perform before attendees encouraged to be dressed up as new romantics, wear their widest shoulder pads or decked out in their finest shell suit.

Peel back Door 2 of the #GiganticAdventCalender to discover the Nottingham Winter Wonderland.

Offering festive fun for all the family, Nottingham Winter Wonderland brings a whole world of magic to the cities Old Market Square. Marvel at the magic of the Ice Bar or get your skates on and glide across the Ice Rink.

Nottingham Winter Wonderland is now open, and we are taking bookings right until Sunday 31st of December.

Kew The Music 2018 can be found behind Door 3 of our #GiganticAdventCalender.

Kew The Music brings some of the biggest names in rock and pop to the idyllic setting of Kew Gardens in London. The perfect place for a picnic, these splendid outdoor summer shows are always a huge hit with people coming from far and wide to see something special.

Christmas is counting down, and Door 4 of the #GiganticAdventCalender brings BlokOut Festival 2018.

Nestled in Lacko Park in Derbyshire, BlokOut Festival 2018 is the ideal weekender for those with a sense of adventure. Exciting fun fairs, challenging escape rooms and a variety of interesting things to eat all await you – plus a great line-up of live music!

BlokOut Festival allows you to stay over in style with the option of Glamping on offer.

On the fifth day of the #GiganticAdventCalender my true love gave to me - tickets to All Points East.

The people behind the infamous Coachella Festival invite you to All Points East. Each major outdoor event takes place at Victoria Park in East London and is headed by such huge headliners as LCD Sound System, The xx, Bjork, The National and finishing with Nice Cave & The Bad Seeds.

We are shifting up to fifth gear for Door 6 of the #GiganticAdventCalender with Fast & Furious Live.

Perfect for fans of the high-octane action movies, Fast & Furious Live recreates some of the most intense moments from the films. Witness some of the world’s most powerful cars being driven by death defying stunt drivers.

You can see Fast & Furious Live at:

Behind Door 7 of the #GiganticAdventCalender we find incredible indie band The Vaccines.

Having burst onto the scene in 2011 with the launch of debut album ‘What Did You Expect From The Vaccines?’, the West London lads have struck that rare balance of critical acclaim and huge commercial success with each subsequent records release.

Their tour takes them to:

The Vaccines tickets are currently available.