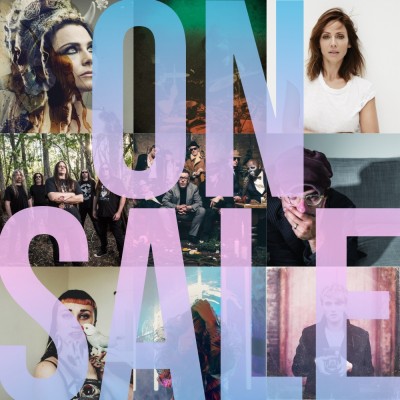 Led by singer Amy Lee and guitarist Ben Moody, Evanescence exploded with the release of their goth tinged metal hit ‘Bring Me To Life’ which helped their debut album ‘Fallen’ sell more than 17 million copies worldwide and win two illustrious Grammy Awards. They have subsequently enjoyed further success with albums ‘The Open Door’ and their third eponymously titled record.

With the release of their fourth album titled ‘Synthesis’ Evanescence are joined by a full orchestra to play very special shows around the country to truly show off the epic scale of their theatrical rock in March of 2018.

Evanescence tickets are released at 10:00 on Friday.

At The Drive In

Blasting out in the min 90’s, At The Drive In quickly became known for their ferocious live performances backed by a string of awesome albums including ‘Acrobatic Tenement’, ‘In/Casino/Out’ and ‘Relationship Of Command’ before breaking up as suddenly as they emerged.

This year sees the blistering band make a surprise release of fourth studio album ‘in•ter a•li•a’. The play the new material plus tracks from their mighty back catalogue when they tour in March 2018.

At The Drive In tickets are released at 09:00 on Friday.

After making her break from acting, Natalie Imbruglia quickly became a household name with the release of her version of ‘Torn’. She has subsequently enjoyed a career which has seen her sell an incredible 10 million records.

Following on from the release of her latest album ‘Male’ two years ago, Imbruglia now announces an extensive tour to commence in the February of 2018.

Natalie Imbruglia tickets are released at 10:00 on Friday.

Ran by The Great Escape, FIRST FIFTY take over a number of the finest East London venues to present you the soundtrack of future festivals through exclusive and intimate shows of cutting edge acts.

For further information, take a look at our Spotlight On: FIRST FIFTY blog listing all the events, venues and excellent curators involved.

Cannibal Corpse are the definition of death metal. With songs such as ‘Devoured by Vermin’, ‘Evisceration Plague’ and ‘Priests of Sodom’, they have seen worldwide album sales of two million records. With the release of their highly anticipated new album ‘Red Before Black’ comes the accompanying promotional tour where they will be joined by Black Dahlia Murder and In Arkadia. Cannibal Corpse tickets will be available from 10:00 on Friday.

The world’s most famous pop, punk rock, blues and country techno situationist crypto-Marxist-Leninist electro band have just announced a new tour. Catch Alabama 3 in Spring 2018 when they hit the road to play a stage near you. Alabama 3 tickets will be available from 09:00 on Friday.

With demand for new releases always high, we recommend that you set a personal reminder so you can be alerted with a text message or email as soon as your favourite event becomes available.

Also coming on sale this week are:

2Q Festival makes its debut in Lincoln. The day festival takes advantage of the many fantastic independent venues the city has to offer and presents a large list of big names and cutting-edge acts. Taking place on Saturday 28th of October, you can look forward to seeing Circa Waves, Peace, British Sea Power and more.

Scott Hansen is the awesome ambient musician from California better known as Tycho. With the release of his most recent record ‘Epoch’, he now heads over to the UK to promote the new material with a headline performance at Roundhouse in London.

Gigantic always offers the very best tickets for the most exciting events. Check out all these hot tickets available for you to order right now: