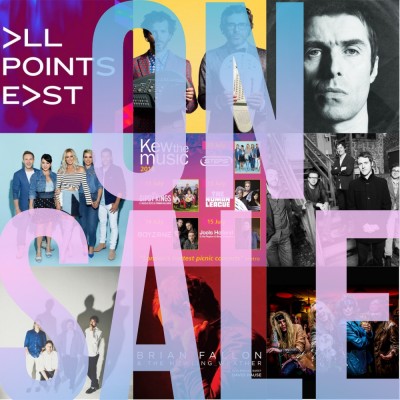 All Points East is the brand-new festival for East London. Organised by AEG and Goldenvoice, the people behind Coachella, the three-day celebration of music will unite major headliners such as The xx with cutting edge acts which promises to be one of the most exciting British events taking place in 2018.

The festival will also be followed by a one-off show at the same Victoria Park site where The National will be headliners for a further day of compulsive listening. Set your personal reminders with Gigantic right away, because these tickets will sell quickly!

All Points East tickets are available from 09:00 on Friday.

Flight of the Conchords

Self-described as "New Zealand's fourth most popular guitar-based digi-bongo acapella-rap-funk-comedy folk duo", Flight of the Conchords stole our hearts in the mid-2000’s with their zany HBO television show documenting their attempts to crack America.

Now Brett and Jemaine are back, performing your favourite songs live during Spring of next year at Birmingham, Manchester, Glasgow, Leeds, London and Liverpool. We really cannot wait!!!

Flight of the Conchords tickets are available from 10:00 on Friday.

Good old Liam Gallagher. Not content with sitting on the side lines the split of Oasis and the collapse of Beady Eye, Liam has struck out on his own and released a solo album which shot straight to No. 1!

Following the release of his sold-out tour comes news of a true thrilling day out at Finsbury Park in London in June 2018 where LG will be joined be an immense line-up of awesome indie and rock acts. As you were.

Liam Gallagher tickets are available from 09:00 on Friday.

Steps are the perfect pop group. Emerging in the late 90’s Lee Latchford-Evans, Claire Richards, Lisa Scott-Lee, Faye Tozer and Ian "H" Watkins were always to be seen on British TV screens and dominating the charts with their Platinum selling records.

Now they make their welcome return with three major open-air shows taking place in the Summer of 2018.

Steps tickets are available from 10:00 on Friday.

The picturesque Kew Gardens are the setting for an annual selection of the very best in rock and pop for Kew The Music every summer.

This year sees Kew The Music play host to The Gipsy Kings, The Human League and Jools Holland. Plus, just announced – Steps and Boyzone will be on sale very soon!

Additional Kew The Music tickets are available from 10:00 on Friday.

Success came quickly to Southport band Gomez. Their debut album ‘Bring It On’ spread like wildfire after they took home the illustrious Mercury Music Prize. Regarded as a modern classic, Gomez celebrate twenty years since its initial release by revisiting their first LP and playing it in full at a stage near you. Gomez are available from 9.00 on Friday.

DJANGO DJANGO became darlings of indie audiences around the UK with the release of the dancefloor filling single ‘Default’ back in 2012. They have since released two hugely popular albums and become the perfect festival band. Next year sees them head out for a Spring Tour. Django Django tickets are available from 10:00 on Friday.

As you would expect, demand for these two shows is massively high so we highly recommend that you set a personal reminder with Gigantic right now. This means you are ahead of the rest and will be alerted with a text message or email as soon as they become available.

With new tickets coming on sale all the time, Gigantic really is the best place to come whenever you are looking to book your big night out. Browse through all these incredible events, tickets are just about to become available:

Calling all fans of garage rock, post-hardcore and art punk, you are hereby invited to The Black Lips Mega Pit Party. Taking place at The Coronet in London, the Georgian rockers will be joined by an immense selection of acts to make up one absolutely unmissable gig.

Finnish percussionist Tatu Rönkkö, Mads Brauer, Casper Clausen and Rasmus Stolberg of Danish act Efterklang are the brains behind indie synth-pop band Liima. Catch them when they hit the UK for early 2018 gigs at Manchester and London.

And finally, you will always find the hottest tickets at Gigantic. Check out all these great events which you can book for friends or for yourself right now: