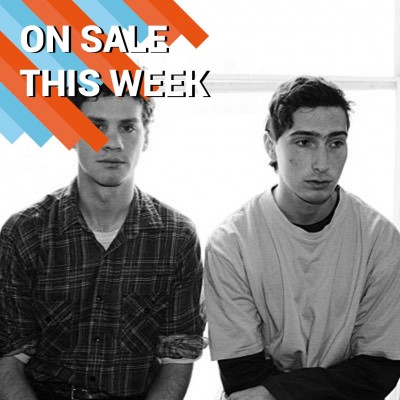 For festivals, gigs and shows, Gigantic always has the very best tickets. Let’s look at what comes on sale this week.

The seamless match has proved a massive hit with audiences across Europe and they look ready to take the stage by storm when they arrive in the UK.

Metal fans will be excited to get their hands on tickets for Architects. The band have announced a tour in November to promote their new album All Our Gods Have Abandoned Us. The record sees an exploration of the current worldwide disillusion and anger in a climate of fear and confusion.

Also, make sure you see them perform at Download Festival.

Dinosaur JR paved the way for nineties grunge with the signature sound of heavy alternative rock and massive use of feedback created by heavily distorted guitars backed up by massive Marshall amps.

The band are back in the UK with their original line up playing not-to-be-missed shows.

Vocalist Paul Carrack is known for his distinctive voice which has led to him being dubbed by the BBC as “The Man With The Golden Voice”. The supremely talented musician has enjoyed a high successful solo career and has been recruited by Squeeze, Roger Waters and Mike + The Mechanics for his skill as a songwriter and keyboardist.

Promoting his new album Soul Shadows, Carrack will be embarking on a massive tour at the start of next year. Tickets now on sale.

110 Above is the new name for Lainfest. Located in the shadow of the ancient temple ruins at Gopsall Hall Farm in Leicestershire, the intimate setting gives fans a chance to get up close and personal to some amazing acts.

D.I.D., Hudson Taylor, Vaults and Pretty Vicious will all be playing at the fantastic festival.

This is your last chance to buy tickets for Dot To Dot Festival. Taking place across various venues in Manchester, Bristol then Nottingham, the festival proves to be a massive smash in each city every year and heralds the start of the festival season.

The stellar singer-songwriter Carole King will be taking over Hyde Park to play a world exclusive concert. Her glittering career has seen her win four Grammys, she has been inducted into the Rock And Roll Hall Of Fame and her breakthrough album Tapestry remained in the US charts for over six years

She will be joined by Don Henley and Louise Goffin plus more special guests yet to be announced.

Check out the hip hop orientated live instrumental sound of The Cinematic Orchestra, Lake Street Dive are on tour and Keto will be debuting their new EP What We Do.

Gigantic is THE place for tickets.