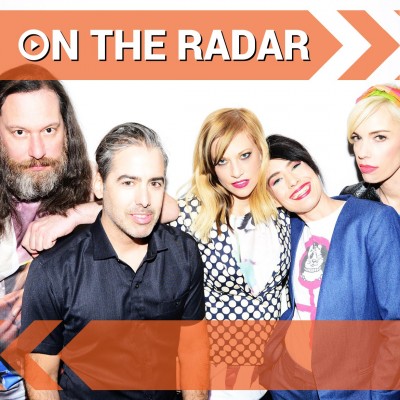 Gigantic brings you the best in new and alternative music as shown in our new section On The Radar.

The indie rock music of The Julie Ruin is a rallying cry for feminism with songs in direct opposition to sexual violence, objectification, inequality and patronisation. Drawing on lo-fi rock and roll with elements of electronica, Kathleen Hanna’s signature valley girl voice and powerful lyrics have found a new vehicle to drive home her important messages.

The Julie Ruin originally started out as a solo project by activist and original riot grrl Kathleen Hanna following the break-up of the highly influential punk band Bikini Kill. Taking the name from feminist philosopher Julia Kristeva, Hannah proceeded to use a $40 drum machine to record tracks in her bedroom resulting in the album Julie Ruin released in 1998. Following the hiatus of her electroclash band Le Tigre Hanna formed a new band which includes former Bikini Kill bassist Kathi Wilcox and an adaptation of title from her former project.

Their second album Hit Reset will be released later this year. It sees them delve into a darker sound that orientates more around rock but still includes the use of synth and electronic instrumentation.

Saul Williams expands the frontiers of hip hop by drawing on his immense poetic talent and a wide range of influences to make absolutely compelling music. His drive, lyrical skill and experimental electronic beats combine to produce heavy hitting tracks in which he attacks the causes of inequality, police brutality and all forms of human oppression.

New York poet Williams started performing his work at open mic events in 1995 and had won the title of Nuyorican Poets Café’s Grand Slam Champion by the end of the following year. As his talents developed further Williams began to work in music first realising his own album Amethyst Rock before working with noise musician Trent Reznor on the Nine Inch Nails album Year Zero. The pair would also collaborate on William’s third album The Inevitable Rise and Liberation of NiggyTardust!

His latest album MatyrLoserKing sees Williams investigate the relationship between the individual and the internet at a time when we are being increasingly spied on by the state. It was released in January this year and sees Williams tour right across the UK this June and July. Be sure to get your tickets before they go.

Big Deal have certainly developed from their first album. The debut album Lights Out was typified by largely acoustic and tender songs giving a slight insight into the romance between Alice Costelloe and Kacey Underwood. Whereas their second album June Gloom saw them find a distortion pedal or two, grab a couple of friends and adopt more of a new wave feel. The change felt instinctively natural and worked extremely well, perhaps best exemplified when they reworked the delicate single Talk from original album to become a bolder and perhaps more euphoric song for their latest release, the Sakura EP.

Their upcoming album Say Yes was initially hampered by the theft of their laptop containing all their demos and working ideas forcing them to start again. Added to this is the breakup of Costelloe and Underwood which can never be easy, especially when continuing to perform songs inspired from their former relationship, but does entice the interesting prospect of how the band will now work and if it will affect the direction of their sound.

Recent live performances have hinted that the band have continued to progress writing as a full band with new songs sounding heavier than before driving audiences wild with a massive wall of sound.

If you have any suggestions of acts you would like to see included in the future, please let us know in the comments below.