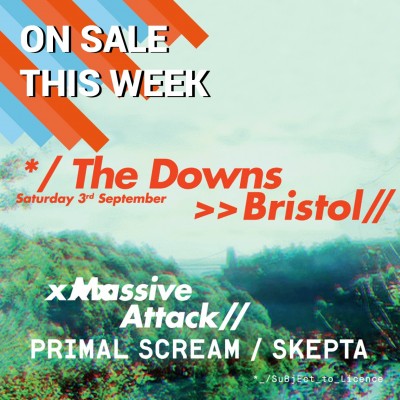 Here at Gigantic we’ve got more tickets than you can shake a stick at. Let’s take a look at what fantastic shows have gone on sale this week.

Massive Attack will be taking over The Down in Bristol, the first time the picturesque landscape has been used for a music event in over fifteen years!

Known for their dark yet euphoric dance music, Massive Attack have continued to wow audiences and critics the world over since the release of their debut album Blue Lines in 1991 with their intelligent music and challenging videos.

Joining them will be the stellar band Primal Scream and grime great Skepta.

Somewhere beyond your dreams lies a winter wonderland when Disney On Ice presents Frozen. The Academy Award®-winning tale of true love has been reimagined into a sublime vision to behold. Now transformed into an unforgettable full length production of impeccable skating on ice and is coming to your town.

Our story is set is the snowy Arendelle where the audience will be treated to dazzling special effects and professional dance and skating as you sing along to your favourite songs, such as “Let It Go”. The royal sisters Anna and Elsa are waiting to greet you, meet the hilarious snowman Olaf, Kristoff and Sven and be taken on a wondrous journey of a lifetime and discover the magic of true love.

Click HERE for your Disney On Ice presents Frozen tickets.

Emmy Award winning comedian Louis C.K. will be performing for your entertainment at The SSE Arena, Wembley in London on Friday 12th of August.

The ever innovative funnyman has continued to excite live audiences around the world on TV and stage. He has also been featured in cult comedy series Parks & Recreation.

Tramlines is fast approaching. Taking place across the very best Sheffield venues Sheffield has to offer, the festival features indie icons The Dandy Warhols, new boys Catfish & The Bottlemen, old school hip hop from Jurassic 5 and the one and only Dizzee Rascal.

Going on sale this Friday is electronica ace Chet Faker, rising star MØ and The Fratellis are promoting their new album Eyes Wide, Tongue Tied with a tour.

Musician and amazing record producer Mark Ronson will be doing a DJ Set at the Jockey Club, Shaun Ryder has reunited Black Grape and Left Wing legend Billy Bragg will be touring with singer/songwriter Joe Henry in November.

With summer just round the corner it is time to think about festivals. Gigantic offers tickets for the best festivals around.

The 1234 Festival takes its name from the four stages of innovative and original artists that make up this magnificent event. This year plays host to such massive names as The Cribs, The Jesus And Mary Chain, Spector plus Carl Barat & The Jackals play at Three Mills Island, London, on Saturday 3rd of September.

The now legendary festival was the must-attend event for the serious music fan.

There is no bigger weekend!

Together The People will feature Beach Boys genius Brian Wilson as he celebrates the ultimate album Pet Sounds. He will be joined by massive rock band The Horrors, singing sensation Gaz Coombes and the sublime talents of Sage Francis and B.Dolan.

Taking place at Preston Park in Brighton from Saturday 3rd and Sunday 4th of September. You know you want to be there.

For tickets, Gigantic is the only place to be.