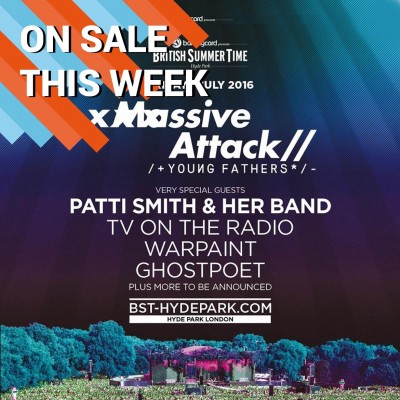 Gigantic always has the best tickets in town. So let’s look at what’s hot this week.

Massive Attack will be taking over Hyde Park for one day only.

The trip-hop troopers will be joined by a whole host of superb special guests such as Young Fathers, Patti Smith & Her Band, TV On The Radio, Warpaint, Ghostpoet plus more yet to be announced.

It promises to be a day that will define the summer of 2016.

Famous the world over, global superstar Rihanna brings her world tour to the UK giving you a chance to see the phenomenon for yourself.

Rihanna tickets are on sale HERE.

Last year saw the underground antiheroes release their breakthrough album Key Markets which smashed into the Top 20 of the UK Charts.

Their gigs often sell out so get your Sleaford Mods tickets ASAP. Buy them HERE.

The Let’s Rock events bring together some of the biggest names of Eighties pop on to a stage near you.

A great festival experience for the whole family.

Let’s Rock tickets are really great present idea or treat for yourself. Buy them through Gigantic HERE.

Also on sale we’ve got some great bands for those who like to rock. Killing Joke will be headlining O2 Academy Brixton, White Denim have got some great headline shows lined up and Coasts are about to kick off their tour.

The legendery Santigold has gigs in June lined up, dub influenced electronica perfect for summer. The extremely alternative Alabama 3 have just put their Autumn tour on sale. Plus much much more!