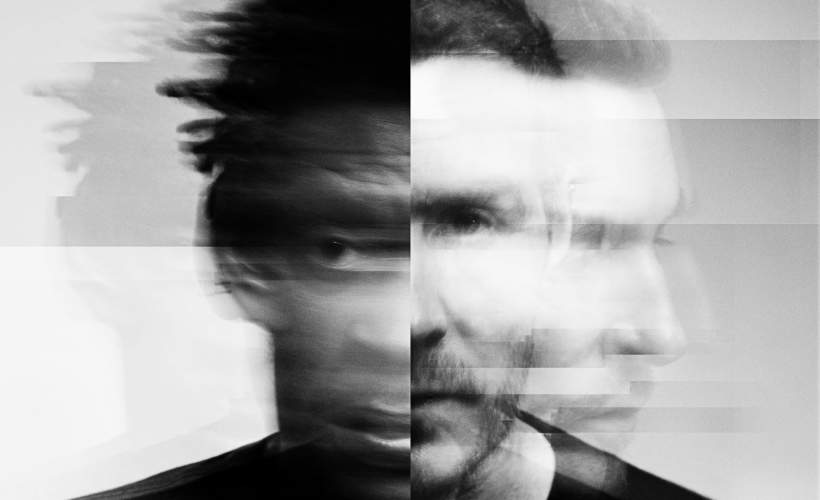 The venue was so well thought out for facilities: the separate large tents with food/drink + Dj's were fabulous + made it seem like a mini festival.
The main 'air-craft hanger' was incredible - the sound was brilliant + the graphics on screen behind the band wonderfully artistic.
The one failure was that the band were hard to see unless you were right near the front - so you did feel it was more of a cinematic experience rather than a live band - if only the stage had been higher.

"Yet another amazing gig!!"

I go to a lot of gigs but have never experienced anything like Massive Attack at the Steel Yard, the show was hypnotic and so brilliantly put together, it was so clever and thought provoking. I have never been to a performance where I didn’t feel I needed to actually SEE the band it was much more about a feeling - at an emotional level the feeling that was created within you at a physical level actually feeling the bass in your body.

Massive Attack were fantastic although I was too far away from the stage to see them up close. The music, sound and light system were all good. The only negative was queuing to get some a burger, only one stall and queued for over an hour, would definitely eat beforehand next time.

"What has happened before will happen again"

Let's get a few things out of the way before I start. Complaints about the sound at the venue are really undeserved. As with all venue's you have to think about how sound moves and reflects. Doesn't take much to find the 'goldilocks' zone. That's on you if the sound was off. Those who complained about the absence of audience participation, you are at a Massive Attack gig, not a Pantomime.

With that out of the way. Enjoyed the performance. Got what the band wanted to get across. Unlike Timothy Leary they are asking you to turn on, tune in, and not drop out. Get angry, get committed, if you don't like the state of play, if want to change how we are represented in Westminster, get involved. Recognise when you are being shafted and played like a fiddle. That applies to all political leanings.

My view a fantastic performance. Keep on doing what you are doing.

Tweet
Massive Attack produce intelligent and considered dance music. Although often bleak in tone it somehow achieves a euphoric warmth that resonates and satisfies. They accompany the intriguing music with innovative visuals and challenging videos marking them as truly experimental and have influenced just about everyone, from Damon Albarn to graffiti artist Banksy.

Their first debut album, Blue Lines, was released in 1991. Fusing hip hop and dub, electronica and reggae, the album flourished in no small part from the perfect vocals of Shara Nelson and contributions from Neneh Cherry. The album featured the amazing single Unfinished Sympathy which had enjoying great European success, previous to the album’s release, in the UK, Germany and reaching the top of the Dutch charts.

The trio continued to work together despite stories often leaking of their volatile relationship. In 1994 the released the album Protection which continued to impress their peers and the general public.

But it was the release of their stand out album Mezzanine in 1998 that saw a massive leap in the success of the band. The media now had invented the title of Trip Hop, and set Massive Attack as the leaders of the movement that also included Portishead and, to some extent, the work of Bjork.

However, to say that the album merely succeeded due to media hype would severely underplay the sheer talent exhibited on the record. The album tapped into pre-millennium tension and was often foreboding in nature which perhaps reflected the inner tensions at play whilst it was made. Mezzanine also contained singles that featured a real understanding of what could be done with an excellent video.

In 1999, Andrew Vowles left when the previous tensions became irreconcilable. Although now only two predominant members left, Massive Attack continued to work and released the albums 100th Window in 2003 and Heligoland in 2010.

2016 sees the release of The Ritual Spirit EP, their first new material in six years. Ever the pioneers, they released the new material first appear through the sensory app Fantom. A piece of software that actively remixes the music according to real world physical stimuluses such as the users movement, location, the time of day and their very heartbeat.

The new release sees them working once again with long term partner in crime Tricky, after his departure after the 1994 album Protection.
To date they have sold over 11 million records. Their career has seen them collaborate with an eclectic list of greats such as David Bowie, Burial, Snoop Dogg and Sinéad O’Connor.

Massive Attack success has seen them win many victories including having won Brit Awards for Best British Dance Act. They have also won a Q Award twice for Best Album in 1998 and the Innovation In Sound Award in 2008. Impressively, they appear in Rolling Stones 500 Greatest Albums Of All Time twice for Blue Lines and Mezzanine.

Furthermore, their talent for understanding and promoting though provoking imagery has also been recognised by the MTV Europe Music Awards when they took the award for Best Video in 1995 and 1998.

On sale right now is Barclaycard Presents British Summer Time which sees Massive Attack taking over Hyde Park for just one day this summer. The concert looks set to be one of the defining days of 2016 which sees the trip-hop troopers supported by an amazing array of acts such as Young Fathers, Patti Smith & Her Band, TV On The Radio, Warpaint, Ghostpoet plus more still yet to be announced.


Just Announced! Massive Attack will be playing an awesome outside concert with the indie legends Primal Scream and grime great Skepta on Saturday 3rd of September.

The spectacular event will take place at The Clifton Downs in Bristol - the first time The Downs have been used for a major music concert in over fifteen years.

“We are curating what we hope will become an annual event something made in Bristol with an international reach. We will also use the project to engage with the important social and political issues of the day" - 3D

Get tickets for Massive Attack with Gigantic!

Come to Gigantic to get tickets for Massive Attack

Massive Attack On Sale This Week