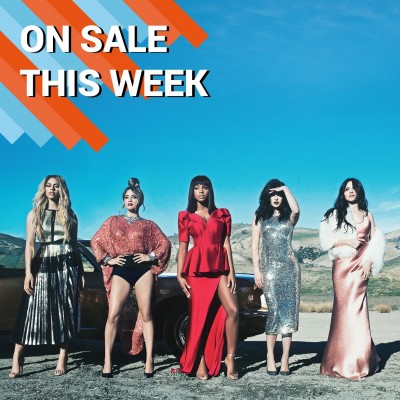 The massive R&B sensation Fifth Harmony are about to hit the UK with a number of highly anticipated arena dates. The pop band signed to Simon Cowell’s label Syco Records after the five singers were united to form a group on hit entertainment show The X Factor USA.

Fifth Harmony have just released their second album 7/27. Shooting straight into the Top 10 in the UK Charts, the album takes its name from the date the band was formed.

Post punks White Lies have just announced the title of their new album will be Friends. The album features the track Take It Out On Me and was recorded and self-produced by the band at Bryan Ferry’s London studio.

The record marks a sense of progression by the band who feel they are moving into a more mature period. The new song certainly sounds confident and it will be exciting to hear the new songs played live.

Bluesfest celebrate their sixth year by gathering the world’s biggest names in blues to play at Brooklyn Bowl and The O2 Arena in London.

Gloworm is a two-day event that combines perfect entertainment for people of all ages with really great live music.

Not only will there be performances from great bands like Toploader, Seas Of Mirth and Unknown Era there will also be appearances from children’s favourites such as Mr. Bloom plus Dick & Dom.

Soon to come on sale we have good time punks The Front Bottoms, folk favourites The Low Anthem and indie rockers The Heavy.

The ever enigmatic folk singer Beans On Toast is about to embark on his tour, 65DaysOfStatic play their soundtrack for upcoming video game No Man’s Sky to live audiences and Lany get ready to rock the UK.

Plus, Club.The.Mammoth have organised a fantastic all day festival that sees The Fall, Future Of The Left, Hookworms and more play at the O2 Forum in London.

Marvel Universe LIVE! Super Heroes Assemble draws on the rich legacy of the films and comics to tell the ultimate story of good versus evil as heroes risk all to protect against world domination. Featuring over 25 of your favourite superheroes and villains, the action packed adventure sees Loki steal the ultimate power of the universe for his own wicked ends. Can the Avengers and their allies defeat him?

The spectacular show includes stunning special effects, amazing acrobatics and is coming to a town near you.

Tickets are sure to go fast so get yours before they are gone.

The Spiegal Tent will be located at the Old Market Square in the very heart of Nottingham to play host to all manner of fantastic events from incredible dance shows, to pantomime and workshops that demonstrate and even teach amazing feats of acrobatics!

Check out the weird and wonderful world of We Are Monsters, fantastic variety show Bless Em All and also the telling of the classic story Jack And The Beanstalk.

We’ve got tickets for Yellowcard as they prepare for The Final World Tour. The Floridian punks will release their final self-titled album and give the world one last flurry of energy onstage before bidding farewell. Rock fans can also treat themselves to Tiger Army tickets or check out just what makes Black Honey so amazing.

Other great events on sale include the supremely funked up Con Brio, jazzy hip hop band Badbadnotgood and the sugar man himself; Rodriguez.

And finally, Peter Andre is still looking for his mysterious girl plus Lucinda Williams has some exciting dates just around the corner to promote her new album The Ghosts Of Highway 20.