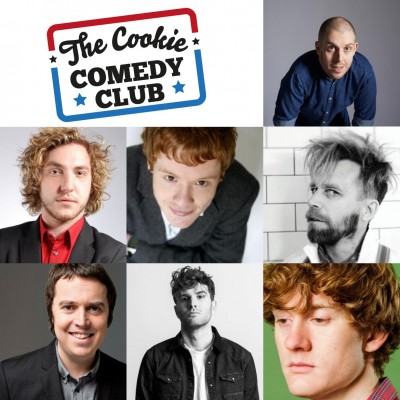 Fantastic Leicester club The Cookie hosts an amazing array of gifted comics as part of their annual Edinburgh Preview season. The hilarious events are an excellent way of watching the comedic greats try out their sets before hitting the world famous Edinburgh Festival Fringe.

Canadian comedian Tony Law first came to our shores aged eighteen and took his time making his break, having won the Chortle Breakthrough Act Award a good fourteen years after he first started out.

Since then his hilariously surreal material accompanied by his huge talent for ad-libbing sees him delving into realms even he has not expected and earned him the Chortle Awards for Best Show and Best Club Comic. He has also been appeared on (Comic Central UK) The Alternative Comedy Experience, (Channel 4) 8 Out Of 10 Cats and (BBC One) Have I Got News For You.

Kettering lad James Acaster had a bit of a hard time before becoming the award winning whimsical comedian he is today. Having started off playing in a band nobody liked he decided to try his hand at comedy only to have his microphone stolen, a bucket of sick discovered at the back of the room of his early shows and received a single one-star review.

However, the hard luck hero has gone on to win over audiences all over the world having won Best International Show at the New Zealand International Comedy Festival and appeared on (BBC One) Have I Got News For You, (BBC Two) Never Mind The Buzzcocks and (BBC One) The John Bishop Show.

After graduating from Jill Edward’s prestigious comedy workshop Seann Walsh has gone from strength to strength winning Leicester Mercury Comedian Of The Year and Chortle Best Newcomer in 2009.

No stranger to the Edinburgh Fringe, Walsh has made repeated performances with his sketches Seann To Be Wild and The Lie-In King and has been nominated for the Foster’s Edinburgh Comedy Award.

All three of his previous shows in February at The Cookie were sold out – so book early!

Having built a solid reputation around the UK comic circuit, Carl Donnelly has been invited to appear on various television shows including (BBC2) Mock The Week, (All 4) Stand Up For The Week and Dave’s One Night Stand.

His conversational, sill sense of humour also makes him a great hit on radio leading to him becoming a regular guest on talkSPORT and has appeared on (BBC 5live) The Back End Of Next Week and (BBC Radio 4) Loose Ends .

In 2004 Andrew Lawrence burst on to the scene after winning the BBC New Comedy Award. Since then he has built a loyal following through his acerbic comedy having previously performed such acts as How To Butcher Your Loved Ones and Social Leprosy For Beginners & Improvers and published the book Reasons To Kill Yourself.

Lawrence returns with yet more of his bilious yet witty observations, inciting audiences with The Hate Speech Tour.

The perfect paring of two uniquely hilarious comedians. Paul MaCaffrey made his name after winning the title for best new act at Latitude Festival and The London Paper in 2009. Since then he has starred on (BBC3) Russel Howard’s Good News, (ITV 1) The Sunday Night Show and more.

Welsh comic Jenny Collier has a huge list of awards to her name including The Percy Award at Adelaide Fringe 2016, Comedy Ashes Adelaide 2016 and Laughing Horse New Act Competition 2014. No wonder critics have her pegged as a rising star.

Since his start in stand up in 2007 Joel Dommett’s career has exploded and saw him become the face of MTV in 2012, presenting their daily news bulletins. He has also found work on (BBC3) Impractical Jokers, (Channel 5) How To Survive A Disaster Movie and (BBC3) Russell Howard’s Good News.

Favourite of the critics, his debut solo Edinburgh show Neon Hero gained rave reviews as did the follow up show Nunchuck Silver Medallist 2002.

We have already sold out of tickets for TV personality and all round funny man Jon Richardson plus (ITV) Celebrity Juice and (BBC Two) Never Mind The Buzzcocks guest star Joe Lycett – so don’t hang around because the rest are going fast too!