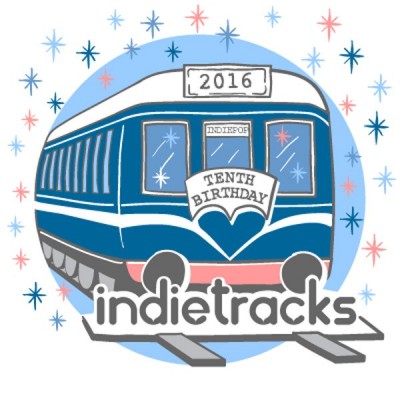 Indietracks, a music festival in a train station, we’re sold on the concept alone! But just in case you want to know more we caught up with the organisers to find out a little more about how they turned a quiet little corner of Derbyshire into a indiepop haven one weekend a year.

This years festival has a stellar line up St Etienne, The Aislers Set, The Spook School and so much more! Indietracks takes place over the weekend of the 29th - 31st July and visitors are free to enjoy steam train rides, railway attractions and museums, discos, art and craft workshops, great food and a selection of real ales.

Have a read below of what one of the organisers Andy Hudson had to say about all things Indietracks. Hi Andy, tell us about how Indietracks was conceived?

The festival was the idea of Stuart Mackay, who worked at the Midland Railway restoring old stream trains. He's an indiepop fan and thought it would be fun to organise a festival at the site. It seemed a fairly crazy idea in the early days, but the railway managers were incredibly supportive and encouraging, and we're now holding our 10th festival this year! It's such a picturesque location, and somehow the combination of steam trains and indiepop music really fits together well. The festival has grown a lot since the early days - it started with three bands on a railway platform, and now there's around 50 artists playing across four stages. We've had some amazing bands play over the years, including Teenage Fanclub and Edwyn Collins, and we're so excited to be welcoming Saint Etienne, Emma Pollock, The Spook School, The Aislers Set and lots more fantastic bands this year.

And away from Indietracks what else do you guys do?

We run Indietracks alongside a team of staff and volunteers at the Midland Railway. To be honest, the five of us do the fun bits like booking bands and interviews, and the railway team do all the hard work preparing the site and buying the real ales. We're so grateful to them for hosting our festival on their beautiful site.

As it is your 10th birthday do you have any surprises planned?

Yes, we're doing a few things. I think there's one surprise we'll save for the day; bit I can reveal a few other things. Firstly, the film-maker Jeanie Finlay has made a documentary about the festival, with a particular focus on the railway staff and volunteers that make it happen. It's beautiful, funny and quite emotional in places, and we'll be screening it over the weekend. We'll also have a disco celebrating bands that have played over our 10 years and we'll have a special programme with some guest contributors.

What are your best personal memories of Indietracks over the last 10 years?

My favourite memories are arriving at the railway on the Friday afternoon, hearing the sound of the steam trains and meeting friends and thinking 'I can't believe we're able to hold a festival here' - I feel that every year when we're setting things up. There have been some amazing performances - La Casa Azul, Allo Darlin', Martha, the Haiku Salut lamp show, Helen Love and the Go! Team are all personal favourites that spring to mind. I also love the performances on the trains as they move through the countryside with people like Pete Green and MJ Hibbett - it's unlike performing anywhere else in the world! Could you tell us a little bit about the fundraising the Indietracks community have been doing this year?

The festival raises money for the Midland Railway charity, and as well as contributing through ticket sales, there's a few other activities. Firstly, Ian Holgate and Brian Bryden cycled 190 miles from London to the railway site this spring, raising over £1000 for the railway. We'll also be releasing a compilation album shortly with bands playing at this year's festival, with all proceeds going the railway. Separately, we're also supporting the charity Sarcoma UK, which raises knowledge and awareness of this type of cancer. Carey Lander, who performed at Indietracks with Camera Obscura, sadly passed away through this illness, and we'll be encouraging people to support her fundraising appeal.

Is there any wisdom you can impart to festivals in their infancy?

Hm, not really! Our festival lost money in its first year, and only started raising money from the second year onwards, so we're probably not the best people too ask! We're very lucky that the railway kept faith with the idea and people keep coming back and supporting us and the artists. I guess new festivals will want to aim for the right balance between being brave and ambitious and not over-stretching financially. We're just pleased to have made it to 10 years - it seemed an impossible dream at the start!

Are there any dream acts you would like to book for Indietracks?

I think lots of people would be really happy if we booked Kenickie, and I'd also like to tempt The Sundays into playing shows again. I'm just as excited about finding some brand new bands though, and the festival making its own memories. Some amazing bands have emerged since we started - Standard Fare, Allo Darlin;, Haiku Salut, The Tuts, The Spook School, Martha, Chorusgirl, to name just a few. We're now on the lookout for some more!

Indietracks is part of a wider community of DIY indie pop events, what else can you tell us about the scene?
Yes, there's lots of DIY indiepop events and musicians all over the world, with labels, festivals, all-day events and popfests in places like New York, Madrid, Indonesia, Glasgow, Tokyo, Berlin, Cardiff and many other places. Indietracks is just one part of this community and we couldn't exist without this network of friendships and events. We're really proud to have welcomed bands and DJs from all over Europe and the rest of the world at Indietracks. It's hopefully a very international festival, and also a festival where new people feel very welcome and safe. If you've new to the festival this year, you'll be welcomed with open arms!

It wound't be an interview if we didn't ask you what your desert island discs would be:

As I'm in promotional mode, I'll just pick songs from past and present Indietracks artists! :-)

a) Camera Obscura - 'Lloyd, I'm Ready To be Heartbroken'. An essential highlight of every indiepop disco in 2006-8.

b) Saint Etienne - 'Hug My Soul'. Or pretty much anything from their huge catalogue of pop hits.

c) Allo Darlin' - 'The Polaroid Song'. Their Friday night set at Indietracks 2014 was possibly our best moment ever.

e) The School - 'All I Wanna Do'. I'd be a terrible DJ, but this is the song I'd close the festival with on the Sunday nightgiven the opportunity. It always reminds me of our early years.

Where do you see Indietracks in 2026?

Haha, we're totally focused on this year at the moment. I'd imagine in 2026 it will all be in virtual reality using Google Glass 2.0. (What happened to Google Glass?) We'll have driverless steam trains and Kenickie and The Sundays will be playing in 3D hologram.

What were your first festival experiences?

I went to Glastonbury as a teenager in 1995, and it was amazing. This was back in the days where the fence was a thin sheet of cardboard and everything was slightly less commercial and more chaotic. In fact, I can't believe my parents let me go with friends - they clearly thought I was responsible for a 17-year-old! It was the height of Britpop and triphop, the awakening of the new Robbie Williams, and there was an era-defining Pulp headline set (which we missed to see Portishead (also really good, but wish I'd seen both!)). I've been back a few times since and while I love watching the TV highlights, it's no substitute for being there.

Tickets are on sale now!