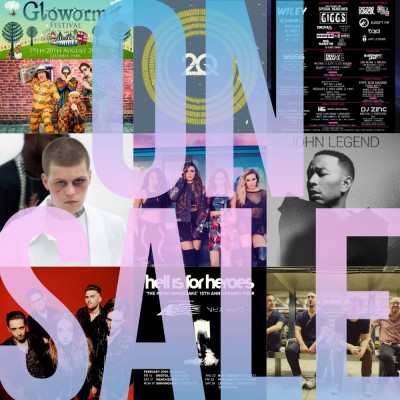 Looking for a big weekender? Then look no further than Lockdown Festival! Bringing some of the world’s biggest names in grime, drum and bass, electronica and dance - Lockdown Festival has a premium line-up of DJs and MCs including Wiley, Giggs, Dizzee Rascal plus many more.

They also offer you the chance to book Pre-Pitched Accommodation with the option of great extras including luxury bedding, furniture and sleeping bags allowing you to rock up and leave without the stress of putting up a tent. Book right now!

Created especially with your little people in mind, Gloworm is the family friendly festival that offers the kids plenty to do. Check out the magic shows, get involved with Sublime Science and jump around to Fun – Zumba. Plus, celebrity appearances from Postman Pat and more.

In addition to all the exciting activities, you will also enjoy music from the likes of S Club Party and The Cuban Brothers all adding to the perfect weekend.

Following the huge success of their debut in Derby earlier in the year, 2Q Festival looks to take over the many fantastic stages of Lincoln’s best independent stages in October. The line-up includes such crucial acts as Circa Waves, Peace, Busty And The Bass with many more yet to be announced.

2Q Festival is also currently offering Early Bird tickets when they return to Derby in April of next year. Grab a bargain and book your ticket today!

Amazing girl band Little Mix have come a long way since first auditioning on The X Factor. Their career has seen them top the charts and perform all over the world.

Last year saw the release of their latest record ‘Glory Days’ which was their first album to hit No.1 in the UK charts. Following this massive commercial success, Little Mix have announced two major headline shows at the South of England Showground at Haywards Heath and Earlham Park at Norwich in September 2017.

Jonatan Leandoer Håstad AKA Yung Lean is the Swedish rapper taking the world by storm. Leader of the Sad Boys collective, he has scored major hits with the tracks ‘Kyoto’ and ‘Yoshi City’ with a new album expected to come out this year. Yung Lean & Sad Boys tickets have just been released.

Celebrating the 15th anniversary of their seminal album ‘The Neon Handshake’, Hell Is For Heroes team up with bands A and Vex Red to play their classic material once again on a February 2018 tour. Hell Is For Heroes tickets go on sale at 10:00 on Friday.

With demand for these events sky high, we really recommend that you set a personal reminder with Gigantic so you can be alerted with a text message or an email as soon as they are released. This will set you ahead of the rest and mean you are amongst the first in line.

We always have the latest tickets as they are released. Have a look at all these awesome events that have just gone on sale:

MIRRORS takes over the very best stages Hackney has to offer for a one-day festival offering some truly exciting music. Check out our BLOG listening the Top 5 acts you need to see.

Combining a wonderful sense of nostalgia with some incredible indie acts, Beano On The Sea is the big weekend coming to Hastings Pier.

Pulling together a great line-up of big name and cutting-edge acts, OnBlackheath boasts the likes of Travis, The Libertines, Metronomy and Seasick Steve.

The aptly named John Legend always puts on an incredible show, marking him as one of the world’s greatest live entertainers. Following the release of his latest album ‘Darkness And Light’ last year, the Grammy Award winning R&B singer hits the UK in September to commence his unmissable arena tour.

Enigmatic singing sensation Emeli Sande saw her recent tour of intimate shows sell out in a mere 9 minutes! Now she offers you the chance to see her perform songs from her multi-platinum award winning albums on her autumn arena tour this October.

Gigantic always has a huge range of essential tickets, just for you. Take a look at this selection of great events we know you will just love: