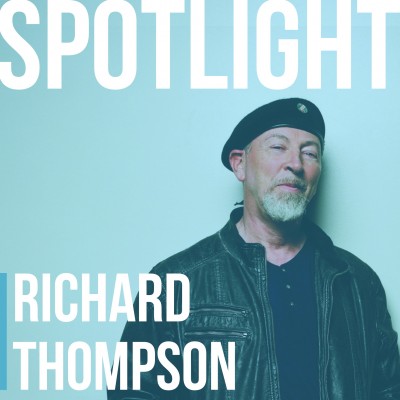 Rock music magazines are often given to compiling lists of the greatest ever guitarists and placed amongst Chuck Berry, Eric Clapton and Jimmy Page you will frequently find the name Richard Thompson.

The critically acclaimed songwriter has been well decorated for his prolific work, having received many Lifetime Achievement Awards, an Ivor Novello and even an OBE. London born Thompson has also worked with such huge names as Elvis Costello, David Gilmour, R.E.M., Jefferson Starship plus many more over the course of his illustrious career.

This year sees the release of his latest album which is titled ‘Acoustic Classics II’. It is the second time Thompson explores his excellent back catalogue and reworks his hits in a stripped-down fashion to give a more intimate feel.

The new approach enables Thompson to explore the nuances of his music, pursuing new possibilities that have previously gone unheard and breathing new life into his well-known material. “It’s a weird thing for a singer-songwriter to be getting up every night and playing material from their whole career; playing a song that they wrote when they were eighteen years old!” explains Thompson. “I find that very strange. If you’re a painter, you paint a picture and sell it to somebody in South America or wherever and you never see it again. As a songwriter you’re revisiting your songs periodically and I think you learn to reinterpret them and find different things in them. Some songs might be a bit juvenile or you don’t feel the emotion that you used to, but you can still find different ways to interpret them.”

The forthcoming record also includes a second disc of rarities. This is a mix of acoustic songs that will excite the true Thompson fan, many of which have previously been recorded with different singers. The two disc set is currently available in various limited edition bundles through PledgeMusic.

“When Richard Thompson sings, seas part and rocks crumble. His is an authoritative, confident voice, but also a breathlessly young one, unchanged over the years, as this second collection of acoustic versions of his back catalogue proves.” – The Guardian

Do not miss your chance to see Richard Thomson perform live. Touring in October, you can see him play on a stage near you!