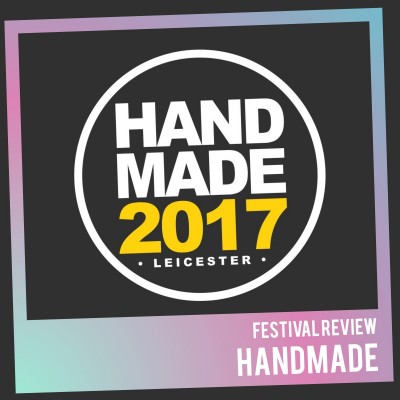 The May Day bank holiday weekend saw Leicester play host to Handmade 2017. Tailored to suit the taste of the discerning music fan, the bulk of the action took place at the abundance of great stages found at the University of Leicester over Saturday and Sunday, preceded with a few added special spaces on the newly added Friday Fringe.

Early Bird tickets for Handmade 2018 have just been released!

Eyre Llew - All photographs are reproduced with the kind permission of Stephanie Webb. (stephaniewebbphotography.com)

The weekend starts off with a jaunt to Bishop Street Church to catch Cold Water Souls. Kicking off the weekend in a church wasn't exactly what I expected, but the highly emotive charged ambient rock of the local heroes goes down a storm and shows great promise for the future. They are immediately followed by post rock inspired three-piece Eyre Llew who make great use of the dramatic space by starting their set with a sample of an Alan Watts lecture on anti-materialism plus later theatrics as Jack Bennett plays his Telecaster with a violin bow. Small in number though great in scale, the three conjure a sense of majesty through their epic and yet moving music that almost threatens to dwarf their grand surroundings.

The adventure continues after taking a short walk to the extremely cool Firebug Bar. Upstairs the first band we see are Husky Loops. Taking on the frenetic energy of post punk but giving it the space to breathe by hitting a good hard power chord or two and letting it ring for effect, the three London lads certainly impressed. Dead Pretties take on the bass riffs of first wave punk that fuse heavy rock and dub to create a monster sound. Brimming with confidence matched by their clear prowess, the young trio sound like a band that should already have three or four proper albums under their belt.

Kagoule - All photographs are reproduced with the kind permission of Stephanie Webb. (stephaniewebbphotography.com)

The weekend sees the entire event relocate from the city centre to the short distance of the University of Leicester and for me the day kicks off with a band I’ve been eager to check out; Goat Girl. Their approach to the stage belies the oncoming performances as they quietly, almost nervously, tune their guitars. However, the shy impression soon melts away to reveal shades of sixties cool as they proceed into a confident set that sees them shift alternatively from off kilter haphazard riffs to a brash cacophony garage rock.

Tucked away in the small dark chamber appropriately named The Cave downstairs, Peaness bounce their way through their highly-charged tracks employ dual vocals and fill the sweltering room with energy as each song fires off a fresh burst of excitement. Their catchy hooks are absolutely made for setting alight indie discos.

With the upcoming release of their second album fans of Kagoule quickly flocked to The Scholar as they were setting up, eager to hear their new tracks. Showing every sign of returning to Handmade as a headliner, the immidiately plunged into their latest material; ‘Magnified’ and then ‘Balance’, and gave it their all despite being drowning by the smoke machine. This is a band undergoing a fast evolution, currently growing to inhabit cult status as they grow to become something even bigger and I cannot wait to hear the rest of the imminently released new music.

Idles - All photographs are reproduced with the kind permission of Stephanie Webb. (stephaniewebbphotography.com)

Handmade clearly doesn't understand Sundays are for sleepy days sat in front of the telly by, arguably, saving the strongest day till last. The first band I catch are Orchards in The Cave. An excitable band able to project their high energy into the performance while also displaying a strong vocal command and great riffs care of an abundance of effects. A party band who can certainly bring the power when they need to. This is followed by London indie pop band Happy Accidents playing in The Scholar. Brimming with childlike glee and fulled by a nerd like zeal, they may appear like total innocents but they still know how to tell someone to stick it – smiling all the time.

The anticipation was palpable and Academy 1 filled fast when it became time for Idles. Each time they play they prove to be absolutely unmissable and their appearance at Handmade was no exception. Having seen them a couple of times before I knew to expect glorious carnage, but on a bigger stage they were given the space to show just how they can make a space their very own. Clearly enjoying every minute of it, the Bristolian band smashed through an unrelenting half hour of insanely heavy riffs which saw them leap into the audience who were left baying for more.

The great thing about Handmade is the few clashes between all the acts you need to see, but you do have to be quick off mark at times. A quick dash upstairs to the large hall of Academy 2 meant I didn’t miss any of Life. Having been banging on about them to all my mates for weeks, my reputation was on the line and they most definitely did deliver. Oozing northern charm yet unleashing sheer fury, the Hull gang did an excellent showcase of their upcoming politically driven post punk debut album ‘Popular Music’.

Life - All photographs are reproduced with the kind permission of Stephanie Webb. (stephaniewebbphotography.com)

The amazing music continued with the arrival of the razor sharp Honeyblood. Singer Stina Tweeddale proved to be the best guitarist of the weekend as she expertly ripped through each song. The pairing offer a great many exceptional singles plus have a wealth of album tracks that sound like they should be.

Many came to see British Sea Power who certainly have a powerful tidal draw, attracting one if the biggest audiences of the whole event.  As they rip into ‘Remember Me’ the audience is bolstered by the addition of two giant bear mascots, one white the other black. The latter of which will bash me in the head trying to get past. An impressive set which ends with the band Bellowing like a Soviet Orchestra, giving a final sense grandiosity

For me, the weekend draws to an end with an incredible performance from JAWS. Fleet, stylish totally cool, their music filled the huge hall and radiated with resplendent light which could not fail to impress.