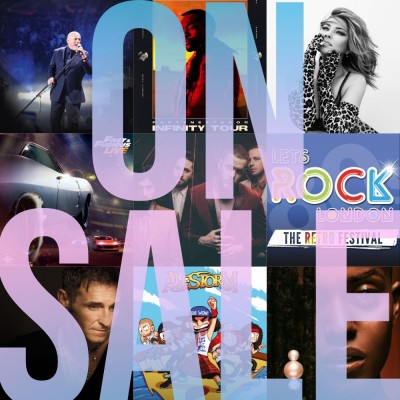 Grammy Award winning singer Billy Joel was born in the Bronx and has enjoyed a career which has seen him become an international superstar. With songs like ‘Piano Man’, ‘Uptown Girl’ and ‘We Didn’t Start The Fire’ have come to define the times when they were released and seen him enter the Rock And Roll Hall Of Fame. Having sold a staggering 150 million records, he is one of the world’s most successful recording artists who never fails to impress whenever he performs live.

Join Billy Joel for an extra special show taking place at Old Trafford (MUFC) in Manchester on Saturday 16th of June for an unforgettable evening of music.

Billy Joel tickets are released at 09:30 on Friday.

The Let’s Rock touring festival unites some of the very best acts from the 80’s – the decadent decade which brought us New Romantics and New Wave. If you had it, you flaunted it and everything was big and bold. Let’s Rock London will take place at Clapham Common on Saturday 28th of July 2018.

Early Bird tickets are just about to be released. Given the popularity if these shows, it’s a really good idea to click the link below set your personal reminder right now as these tickets will fly off the shelf!

Let’s Rock London tickets are released at 09:00 on Friday.

Prepare to feel the force of high octane energy at Fast & Furious Live! The global arena tour shows off all the high adrenaline action of the multi-million dollar film franchise, showing off the powerful cars, the work that goes into choreographing the jaw dropping stunts and the high tech special effects.

The show will tour through the UK extensively. Make sure you are there when it comes to London, Newcastle, Manchester, Birmingham, Sheffield and Glasgow.

Swaggering Las Vegas band Imagine Dragons flawlessly flow from electro beats to full on rock and roll. Following the release of their debut album ‘Night Visions’ in 2012 they were named “Breakthrough Band Of The Year” by Billboard and released second album ‘Smoke + Mirrors’.

This year saw their brand-new album ‘ƎVOLVE’ rise to No. 3 in the UK charts. They have just announced their plans to hit the UK in 2018 to play two nights at The O2 Arena in London.

It has already been a major year for Mississauga hip hop star PARTYNEXTDOOR AKA Jahron Anthony Brathwaite, taking home Best New Canadian Artist at the iHeartRadio Much Music Video Awards. Having created a massive buzz announcing his next release will be called ‘Club Atlantis’, UK fans are thrilled to hear about his forthcoming tour. PARTYNEXTDOOR tickets are released at 09:00 on Friday.

Having sold more than 100 million records worldwide, Shania Twain is the undeniable ‘Queen Of Country Pop’. Due to the incredible demand, a second date at The O2 Arena in London has been added to the tour supporting her new album ‘Now’. Shania Twain tickets are added at 09:00 on Friday.

Excitement for these two major events is massive leading to high demand. Make sure you set a personal reminder right now so you can be alerted with a text message or an email as soon as the tickets become available.

Gigantic is famed for having a wide range of essential gig tickets which is always expanding. Check out these many events being made available to you this week:

The world famous EFG London Jazz Festival returns. Providing a superb selection of major names plus rising stars, the annual celebration of all things jazz always delivers high quality performances at some of the capital cities very finest stages. Take a look at the many shows, including Robert Glasper and Thelonious Monk plus more which are sure to go very quickly.

Helping the homeless, Beat The Streets is a multi-venue day festival in Nottingham featuring over 80 national and local bands. Organiser George Atkin said;

“It is increasingly evident that we have a growing problem once again with homelessness in the city with many people reaching crisis point. The aim with Beat the Streets is to make it a force for positive change, using music to bring together the people of Nottingham to raise funds to help make a difference where it is so desperately needed.”

Beat The Streets tickets are available at 10:00 on Friday.

Blast Off! brings together many of the fantastic independent venues of Nottingham for a crucial weekend of 50’s trash, 60’s psyche and garage plus a whole load of punk rock. Featuring The Pretty Things and The Fuzztones.

Blast Off! tickets are currently available.

Famed for bringing jungle to the masses, West Midlands DJ and producer Goldie has just released his latest album ‘The Journey Man’. He takes the new material on the road this November with a huge tour which takes him to Manchester, London, Brighton, Wolverhampton and Bristol. Goldie tickets are on sale now and going fast!

Bringing together the very best tribute acts, Let's Have A Rock n Roll Party celebrates the music of the 50’s and 60’s with cover acts representing the work of Elvis, Bill Haley and The Comets, Buddy Holly, Ray Charles and Eddie Cochran. Check out their shows at both Leeds and Manchester.

Gigantic makes booking your essential tickets easy by giving you access to our site 24/7 using your smartphone, computer or tablet. This enables you to have constant access at home or on the go to such exciting events as these: