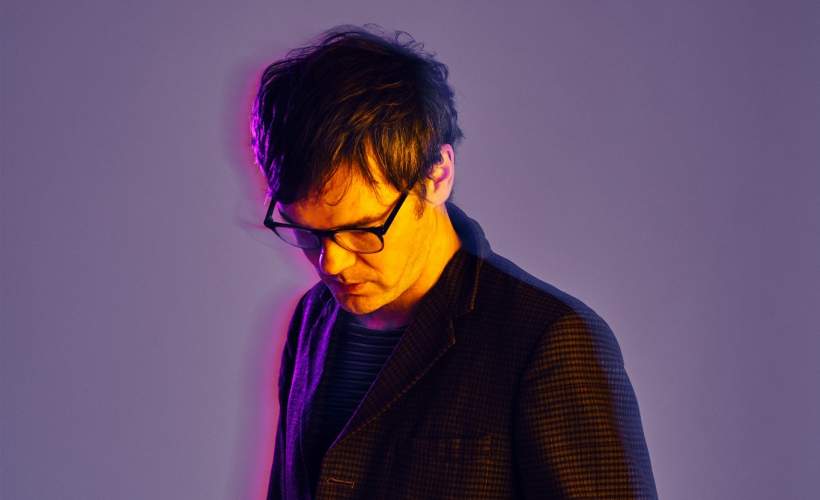 Absolutely stunning show in a suitably matching venue. Paying respects to the history of Idlewild without being bound to or defined by it, the set covered the full spectrum of his career and was delivered with passion. An incredible artist continuing to evolve naturally.

"Sing me the phonebook"

Roddy is so great. I've enjoyed his work since early Idlewild - a learned wordsmith. The new record isn't quite as "jazz" as reviews suggest, but mixes hints at avant gardism with catchy hooks and Americana - at least, that's how the live performance came off. Also, it's a progression to something more accessible than the "folk" of his previous releases.

The room should have been more full for such a talent - we need to see him back here again.

Tweet
Roddy Woomblenow announces special shows at South Street Arts Centre in Reading and Brighton Komedia in April and The Moth Club in London during May 2020.

Demand for Roddy Woomble tickets is sky high. Made available at 10:00 on Friday 13th of September, you can set a personal reminder right now with Gigantic to arrive to you via text message or email so you are ready for their release.


‘Lo Soul’ is the new single from Roddy Woomble, the first from his latest solo album ‘Lo! Soul’ due out in May 2021.

Produced and mixed by recent collaborator Andrew Mitchell (aka Andrew Wasylyk), the new LP was recorded remotely between Roddy’s home in the Hebrides and Andrew’s studio in Dundee throughout 2020 while Scotland was locked down.

Roddy says: “I’m a collaborative songwriter, used to working in a room with one or more people, or a band, and I think my songs benefit from that human connection and response. With lockdown last year my initial reaction was not to work on songs. It offered a pause for us all, and like many others I found myself alone and reflecting. Concentrating on reading and writing. Considering maybe working on a book of poems instead…
Gradually though, I started developing songs on my acoustic guitar which I would record on my phone and send on to Andrew in Dundee. Around then, my friend and musician Danny Grant, based in Glasgow, began sharing his wonderful electronic grooves and rhythms with me. I started improvising over these with my poems. It didn’t feel like an album we were creating at this stage though, more a scrapbook of this particular moment. As restrictions eased in the summer I spent three days in Andrew's studio recording vocals and developing these ideas. Other than this, the album was all recorded remotely - Dundee Glasgow, and the Hebrides".

Both musically and lyrically, the single is a mix of optimism and pessimism - attitudes that we have all been trying to keep in balance this past year. Roddy explains:“I have always been an admirer of the word ‘Lo’, Walt Whitman uses it quite a bit - (..’Lo, the unbounded sea...) It is a call to attention, in it’s dictionary definition. I'm using it like a wake up call - a wake up call through the ages!”

The album Lo! Soul will be released digitally on 21 May 2021, followed by a vinyl and CD release on 30 July 2021, including a limited edition indie record store exclusive coloured vinyl.

Previously announced live shows for May 2021 have now been rescheduled for March 2022 with original tickets still valid. These are accompanied by a string of UK-wide dates in October 2021 including Roddy’s biggest solo headline show at London’s Union Chapel.

Everyone is after Roddy Woomble tickets, so with the demand so high you will need to make sure you book yours quickly as they will go. Gigantic makes selecting and booking your chosen gig tickets easy by enabling you access to our site 24/7 using your computer, smartphone or tablet from the comfort of your home or whilst you are busy and on the go.

Roddy Woomble formed art rock band Idlewild whilst studying at the University Of Edinburgh. The band exploded towards the latter end of the 90’s and grew from cult outsiders to mainstream success. They released eight highly acclaimed albums, two of which debuted in the Top 10, plus a further three compilations. They entered a hiatus in 2010 and then came back three years later and continue to work on new material.

It was in 2006 that Woomble heralded the start of his solo career with the release of the album My Secret Is My Silence. Produced by John McCusker, it shot straight to #1 in the UK Folk Chart and was included by many critics in their ‘Best Of The Year’ album rundown.

It was followed two years later in 2008 with collaborative album Before The Ruin written with Kris Drever and John McCusker, then follow by second solo album The Impossible Song & Other Songs in 2011. His latest albums are Listen To Keep and Live At Kings Place.

Woomble also united poets, writers and musicians to create the LP Ballads Of The Book which was released through the label Chemikal Underground.

We are absolutely thrilled to be able to offer you Roddy Woomble concert tickets. As you would expect, they are going to sell quickly so please place your booking early or you will likely be left disappointed. Having been appointed ‘Retail Business of the Year’ by Nottingham Post, you know Gigantic is the very best place to choose from a wide selection of essential gig tickets whilst being assisted by the best customer service meaning we are the only place to come whenever you are booking your big night out.