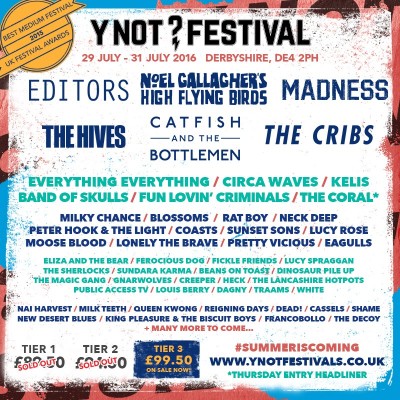 We’ve just got word that Y Not have added a whole host of amazing acts to their already stellar line up. Here’s a roundup of some of the most notable acts.

Friday night will be headlined by the almighty Editors. The Staffordshire indie outfit’s most recent album “In Dream” smashed into fifth place in the UK album charts. Blending electronica with their signature brooding sound the band have really developed from cult heroes to future superstars.

Their appearance at Y Not will mark their return to the UK after having played support for an arena tour with Manic Street Preachers before heading overseas to take part in a whole host of European festivals.

Fun Lovin’ Criminals will be on hand to show everyone how it’s done. This year marks the twentieth anniversary of their gangster rock album “Come Find Yourself”.

Another massive announcement is the addition of Kelis. This hit maker will be sure to bring you all to the yard.

For those of you with an early entrance ticket, the Thursday headliner with be The Coral.

Other newly added acts you do not want to miss are Peter Hook & The Light, HECK, Band Of Skulls, Dinosaur Pile-Up, Eagulls and Lucy Spraggan.

And all this is in addition to the acts they’ve already announced, including Noel Gallagher’s High Flying Birds, Madness, The Hives, Catfish And The Bottlemen, The Cribs and Everything Everything plus many more. With the entry price being far less than you’d pay for most other festivals featuring this lot, it does make you think; Seriously though – why not?!?!?

Ticket are on sale through Gigantic right now, and you can buy them right HERE.

Let us know what you make of all the additions in the comments below!