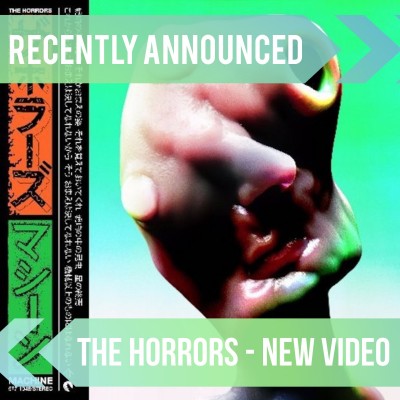 The Horrors have just unveiled the brand-new video for ‘Machine’, the lead single from their forthcoming fifth studio album fittingly titled ‘V’. The accompanying video maintains the album’s artwork themes of organic inspired surrealism with echoes of 90’s underground rave videos which progresses a trajectory started with influences of dark psyche and krautrock to now encompass elements of trance. The release comes amid allegations that the cover art and subsequent video release plagiarises the work of designer Jesse Kanda.

Although initially affronted by the band’s action, Kanda has subsequently come to a place of understanding and even support for their new releases which he expressed through a tweet.

“At first I felt a bit territorial… But when I started seeing some people accusing some of my work being just as similar to some of Chris Cunningham’s work, who had collaborated with the Horrors before, my stance shifted… I absolutely love Chris Cunningham – if I hadn’t discovered his art in my adolescence, I wouldn’t have made some of my art the same way.”

“Sometimes we might step on each other’s toes, but that’s actually out of love and admiration, coincidence, or even unconscious echoing too”. Horrors synth player Tom Furse was quick to respond, replying simply; “love from Horrorsville” which suggests some acknowledgement of being an influence whilst also appreciating Kanda’s benevolent attitude.

You can catch the goth gang when they play O2 Institute Birmingham and Cambridge Junction to promote the new material in October.

The Horrors tickets are currently available.