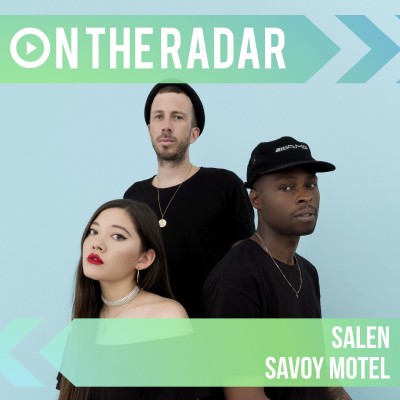 Given that they take kitsch very seriously it could be easily to write them off as a joke however Savoy Motel are more than just a pastiche act. Though their influences are clear with their tongues planted firmly in their cheeks they still write excellent off kilter pop which is sure to set the dancefloor on fire which sets them far apart from any simple novelty band.

So, make sure you catch them when they play two highly anticipated UK headline dates at Louisiana in Bristol and Manchester’s The Soup Kitchen in October. Tickets are currently on sale but expected to go quickly so act fast and book yours before they go!

Sälen are one of the latest London bands to emerge out of the recent synthpop explosion. Combining the talents of Ellie Kamio (vocals), Paul Taylor Wade (bass), Simon Milner (keyboards/guitar), the trio take a sweet pop sound tempered with a hint of bitterness in lyrics that contain a dark sexuality.

Its this undercurrent of acerbic menace which works perfectly with the soft and easy beats, adding a layer of intrigue to what otherwise could have seen them be just another synth band on the scene.

The band have been the subject of huge press attention with critics clambering to lavish them with ever greater praise. Noisey described them as “melty, marvellous pop” and Clash see them as “artfully composed synth pop, matching the sensual to the cerebra”.

They have just announced three headline dates from October and you can see them takeover Bristol Exchange, Patterns at Brighton and London Oslo.

Sälen tickets have just been released!