Scottish Album Of The Year Award 2019 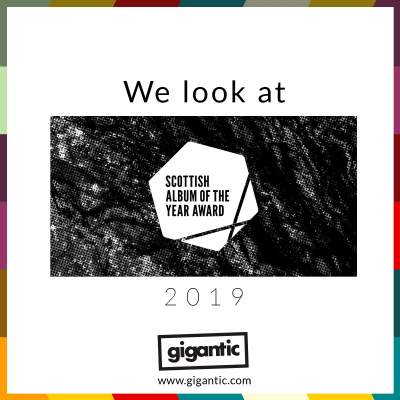 The Scottish Album Of The Year Award celebrates the many excellent artists north of the border, working in many different genres and producing both critically acclaimed and truly important long players. Whilst commercially successful albums are not ignored or barred from entry, focus is placed upon creative merit and the social impact rather than sales meaning it is a true representation of the most vital Scottish music.

First started in 2012, the SAY Awards have been recognised as the most important platform for recognising the best contemporary Scottish recorded music and previous winners include RM Hubbert with ‘Thirteen Lost & Found’, Kathryn Joseph and ‘Bones You Have Thrown Me, And Blood I've Spilled’ plus Young Fathers who have taken the trophy twice with ‘Tape Two’ in 2014 and ‘Cocoa Sugar’ last year.

The public is invited to have their say and have a direct influence on the albums shortlisted to then be evaluated by a team of experts who return with the absolute winner. By voting, you will also be in with a chance of winning tickets to attend the exclusive final ceremony. Be quick because voting closes at midnight on 14 August and you can make your selection HERE.

The winner of the SAY Award will be announced live on BBC Radio Scotland on Thursday 15 August from 21:00 – 22:00 and we cannot wait to hear who will take the prize this year. Keep scrolling to check out this year’s longlist – and make sure you place your vote!

Both previous SAY Award winners, though not together; ‘Here Lies The Body’ is a wonderful partnership of two of Glasgow’s finest songwriters and takes folk to its most compelling cutting edge.

Having previously being named as BBC Radio 2 Folk Awards Musician of the Year in 2014, acclaimed songwriter Aidan O’Rourke is considered the favourite by many quarters.

A cornerstone of Scottish music, Andre Wasylyk has contributed to over sixteen albums including seven as the singer/guitarist for his band The Hazy Janes. ‘The Paralian’ is a lush experimental soundscape.

Auntie Flo (AKA Brian d'Souza) is best known for pioneering his unique Afro-Futurist sound with combines club beats with influences from Africa and Latin America. His latest LP ‘Radio Highlife’ is a hypnotic listen.

Having first began playing the pipes at the age of 7, Brìghde Chaimbeul’s skill is intertwined with her own personal growth. Her debut album ‘The Reeling’ was named The Guardian’s Folk Album of the Month.

Having previous recorded in his own bedroom studio, ‘Health’ is a step up for electronica artists C Duncan as he explores themes of anxiety and sexuality to a highly polished level.

Taking the classic Phil Spector sound as a prime influence, Glaswegian singer/songwriter Carla J. Easton has created ten tracks which are the perfect soundtrack to heartbreak.

The biggest name on the longlist for 2019, Chvrches worked with Grammy Award winner Greg Kurstin to produce their third album ‘Love Is Dead’ which broke the Top 10 in the charts.

Following two cerebral haemorrhages in 2005 and the resulting aphasia it caused, Edwyn Collins had to undergo months of rehabilitation and many thought his career would be over. Fighting back, has since won an Ivor Novello award and ‘Badbea’ is his third solo album to be released after recovery.

Fatherson – ‘Sum Of All Your Parts’

The alt rock band from Kilmarnock are back with their third album ‘Sum Of All Your Parts’ which a must for any fans of emotionally charged guitar music.

Improvisation so flawlessly executed; the skill is hidden by a sense of simplicity. ‘Turas’ is masterclass in jazz which becomes all the more impressive when you realise that it is their debut album.

In a world that feels like it’s losing its grip of rationality and hurtling towards a vicious future, Suzanne Rodden and Lewis Cook present their vision of utopian dance as Free Love. The pair attempt to forge a new path by breaking down the limitations of human possibility.

This minimalist jazz debut album has already attracted widespread attention and seen the innovative band named as "Ones to Watch in 2019" by Jazzwise Magazine.

Karine Polwart has taken home many a trophy at the BBC Radio 2 Folk Awards. Teaming up with Steven Polwart and Inge Thomson she has already won Mojo’s Folk Album of the Year for 'Laws of Motion'.

Kathryn Joseph – ‘From When I Wake The Want Is’

Kathryn Joseph is a previous SAY Award winner with her debut LP Bones ‘You Have Thrown Me, And Blood I've Spilled’ in 2015. ‘From When I Wake The Want Is’ is her second LP and is a real contender to take the title once again.

Kinnaris Quintet have created a high spirited album which connects Celtic traditions with elements of bluegrass and even traditional on their lively LP ‘Free One’.

‘Air Fàir an Là’ translates as ‘at dawn of day’ which accurately describes this bright and optimistic record which modernises Gaelic traditions with electronic instrumentation.

Described by The Observer as "one of the world's top classical guitarists" and a finalist for the BBC Music Magazine Awards – there can be little doubt of Sean Shibe’s talent which shines through on ‘softLOUD’.

The fifth album for post punk revivalists The Twlight Sad; ‘IT WON/T BE LIKE THIS ALL THE TIME’ was a massive success topping the Scottish Album Chart hitting No. 17 in the UK charts reflecting a band which has truly excelled themselves.