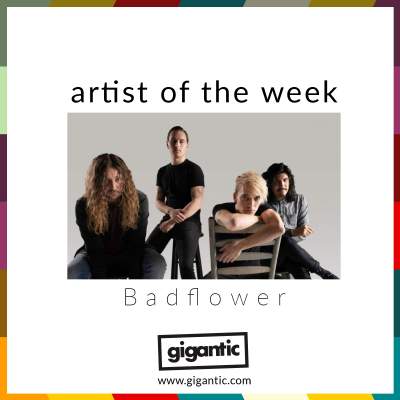 Capturing the timeless feel of classic rock with huge emotive riffs, powerful and effecting song writing on an epic scale and owning the stage every time they play, Californian band Badflower are ready to take guitar led music into the 21st century.

Having early success including impressing all who saw them play SXSW, they now release their debut album ‘OK. I’m Sick’ before coming to the UK to promote their awesome new material.

Originally formed in 2008 by songwriter Josh Katz under the name The Cartunes, the L.A. based band met with little success until former members decided to leave. Recruiting the now familiar line up and choosing the name Badflower, Katz and his crew set about recording a self-produced EP ‘About A Girl’ as a statement of ambition and intent.

The first sign of great things to come was the release of their single ‘Soap’. They were soon packing out venues wherever they played and were heralded as on of the best new bands to play SXSW 2015.

In 2016, the boys recorded and released their second thrilling ‘Temper’ EP. Created in the garage of the home in Thousand Oaks, California during the blazing hot summer; the fiery four tracks capture the intensity of the heat which got so much their MacBook Pro had to be chilled in the freezer just to get it working. It marked a step up in both their abilities and attention being named Apple Music’s Artist of the Week and saw the group sign to racing driver Scott Borchetta’s label Big Machine Records – famed for bringing Taylor Swift to the world’s attention and picking up a Grammy for his production work on both her albums ‘Fearless’ and ‘1989’. Borchetta was so impressed, he chose to be the producer for what would become their debut album ‘OK. I’m Sick’.

Recording their first full length record allowed Katz to truly flex his creative muscles and on ‘OK. I’m Sick’ he was able to both reach those huge rock excesses with massive full on tracks plus write songs with a deeper emotional connection.

"There's a lot of heavy lyrical content -- honest, no filter, very emotive. We're a rock band, so it's a lot of guitar-driven stuff, but also there's a lot of down-tempo stuff -- I guess ballad would be the word to use, but I don't really like that word. We really weren't trying to impress people on a musical level; We were just trying to be genuine and make something that sounded right and felt right." – Josh Katz

A critical and commercial success upon release in February this year, ‘OK. I’m Sick’ was well received by the music press with Cryptic Rock calling it a “bold statement” and Sputnik Music enthusing that “we need fresh blood like this to keep rock alive” as it hit No. 1 in the US Heat Charts.

To promote their essential debut ‘OK. I’m Sick’, the West Coast rockers Badflower are on their way to the UK to play promotional headline dates in November. Supported by rising Canterbury based band Broken Hands who are also pushing a new album ‘Split In Two’, these upcoming gigs promise to be high on energy and excitement so don’t miss out and grab your ticket right now!