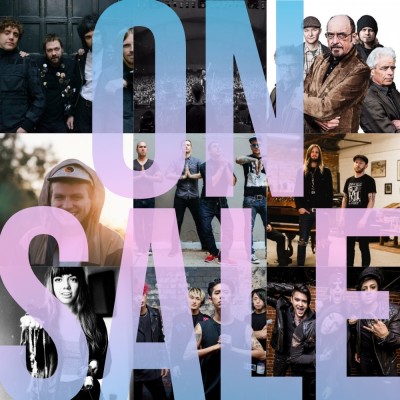 Kasabian lead the way for the resurgence of British rock in the 00’s. Quickly growing from cult band status to dominating the charts with the release of their eponymously titled debut in 2004, each subsequent album release has seen them hit No. 1 in the charts with the band beginning to command the world’s attention following their headlining of Glastonbury Festival 2014.

The Leicester lads released their sixth studio album ‘For Crying Out Loud’ in May and are just about to take the new record out on to the road. Do not miss seeing them when they play an arena stage near you!

Brighton based metalcore band Architects channel both anger and absurdity through their crushing music which taps into melodic metal and blistering technical riffs. The award winners are regularly given prominent festival slots owing to their powerful performances.

Following the release of their almighty album ‘All Our Gods Have Abandoned Us’ last year, Architects will take over Alexandra Palace in London on Saturday 3rd of February 2018. They will be supported by While She Sleeps and Counterparts.

Exploding at the end of the 60’s Jethro Tull blended blues, folk and hard rock to capture the imagination of listeners all around the world and enjoy a career which has seen them play to packed out arenas and sell 60 million records.

Canadian singer-songwriter Mac DeMarco has proven to be one of the most enigmatic musicians to emerge in recent years. More than a mere slacker, he takes an avant-garde edge to folk and indie rock and delves into the realms of the bizarre and romantic.

Having just released his third album ‘This Old Dog’, DeMarco returns to the UK to play three very special shows at The Coronet in London during November where he will play the new material plus further selected work.

Since hitting the mainstream at the end of the 90’s with the release of their debut album ‘Greatest Hits’, Alien Ant Farm have continued to thrill their fans with chart topping singles and awesome live performances. They have just announced a massive UK tour for February 2018. Alien Ant Farm tickets will become available at 10:00 on Friday.

Sheffield finest metalcore band While She Sleeps are known for their intense live experience and regularly cited as a band you must not miss. Join them for a homecoming gig at O2 Academy Sheffield on Friday 9th of December. While She Sleeps tickets will become available at 10:00 on Friday.

Be sure to put yourself ahead of the rest by setting a personal reminder with Gigantic so you will be alerted with a text message or email as soon as your desired tickets become available.

Gigantic is always the best place to get the latest tickets as they are released. Coming on sale this week are:

Raising money for the Devon Air Ambulance Trust and Water Aid, Chagstock is the awesome music festival you need to attend.

Ireby Festival has grown over the years to become highly cherished by their loyal revellers. Organisers have just announced the dates for 2018.

Ireby Festival tickets are released at 09:00 on Friday.

Cornish festival Leopallooza is located at the idyllic setting of The Wyldes. Tickets for 2018 have just gone on sale.

Get to Powderham Castle in Exeter this weekend for Lockdown Festival to enjoy the very best in dance, grime and electro.

Bethesda indie folk songwriter Stephen Black is Sweet Baboo. Drawing on psychedelic influences to thread through his unique take on country music, Black’s music ranges from the hilariously funny to the truly tender marking him as one of the most interesting musicians for a generation. Catch him when he heads out in tour in November.

Folk-Americana group The Wandering Hearts were signed at breakneck speed, being offered a record deal a mere 30 minutes after uploading their first demo. Following the recent release of their debut single ‘Wish I Could’, they have also announced a headline show at The Borderline in London.

Gigantic always has a huge range of essential gig and events tickets for you to choose from. Take a look at the many hot tickets you can choose from right now: