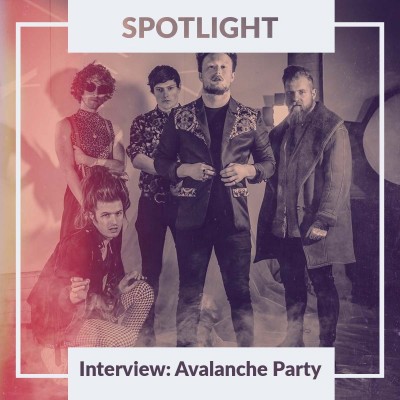 Tearing their way around the UK leaving thrilled spectators in their wake, Avalanche Party are the fast-growing garage punk band based in Staithes fast earning a reputation for vicious guitar riffs, high adrenaline gigs and their promo video nasties.

Avalanche Party have also established themselves as a ferocious festival act, making appearances at Twisterella Festival, Evolution Emerging, Willowman Festival, Humber Street Sesh, We Are Family Festival. Their reputation for electrifying audiences has seen them be invited to play overseas including performing to 10,000 revellers at Oberhausen Rock Festival in Germany, plus further events in France, Serbia, Belgium and Holland.

Within a few short years, the band have been seized upon by the likes of Huw Stephens, Steve Lamacq, Vic Galloway and Tom Robinson and have featured on BBC Introducing, Amazing Radio, BBC Scotland and recorded a live session for BBC 6 Music.

Now, Avalanche Party are poised for even bigger things throughout 2018 and they were kind enough to have a quick chat with Gigantic. You can catch them at cool Nottingham club The Bodega on Saturday 31st of March 2018.

Tell us about how Avalanche Party first got started.

We formed a couple of years ago out of an insatiable urge to do something about the unfathomably wet soup of trifling pish offered up as culture these days. Since then we’ve galloped far and wide like the wild free horses we are.

Talk us through your sound and the influences that contribute towards it.

Imagine a glorious sunny day, you’re lying on an airbed floating in the middle of Lake Geneva with a Pina Colada and a falafel wrap. Suddenly your reverie is disturbed by… nothing. You have no distractions. No troubles. It’s a great time to be alive. Just you and the far off call of a crested grebe. It has nothing to do with our ‘sound’ but it’s a nice image. Treat yourself.

What are your biggest ambitions for the band?

Drummer Kane’s hair is a frequent topic of conversation. When did he last visit the barbers and what was the thinking behind his latest cut?

North Yorkshire rarely features in media other than to depicted as some sort of nostalgic tourist trap. Tell us about where you are from and how that feeds into your music.

Is it harder for a band not being based in the inward looking London bubble or some other similar metropolis with a ready-made sound and style. Or, do you find that it frees you from the trappings and expectations that come with being identified to a certain city?

We feel free from trappings indeed. You need to be good wherever you’re from, and we’re from where we’re from. It makes no difference. We travel around a lot, we aren’t based in London but we’ll still go there, or Glasgow, or Manchester.  Or Belgrade. Don’t limit yourself by being tied down to one place.

You have been enjoying the benefit of widespread critical acclaim. How did you manage to grab the attention of the music press?

We gave them all our money.

Your gigs have fast been earning a reputation for being pretty wild. Tell us about some of your most extreme experiences.

Last time we played in Nottingham we entered the venue bestride 5 mighty Yak. Only thing was they really enjoyed the gig and we couldn’t get them out. Rampaging across the bar, it was carnage. They were meant to leave during the intro but the message didn’t get through. They have very selective hearing, Yak.

Your video for ‘Solid Gold’ exhibited considerable visceral violence. Where did you get the idea to film an extended torture scene followed by bloody retribution?

We watch a lot of daytime television - This Morning, Pointless, Real Housewives, the list goes on. It was the inevitable next step.

Similarly, the video for ‘Money’ has both an air of menace and a cinematic quality. Do you think it is important to have visual impact to accompany the music?

Yes. There aren’t enough blind people to sustain a good living. At our early gigs we used to have an intro that went ‘open your hands, close your eyes and you will get a nice surprise’, but they never fucking did.

After all these scorching singles, we are eagerly awaiting your first full length record. When can we expect your debut album?

What can we expect from your upcoming gigs?

We’re not telling you that. Why would we spoil it?

What are you hoping we really didn’t ask you – and why?

What is the secret of eternal happiness? It’s getting tiresome being asked all the time.