Are You Listening? Festival - Top Picks! 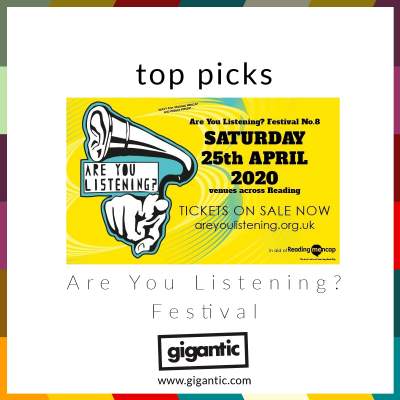 Award-winning festival Are You Listening? returns to Reading for it’s eighth year! The city is renowned for being THE place to party, with its named is steeped in rock and roll history and Are You Listening? is the best way to discover those rising stars which are sure to one day become the sound the defined a generation.

Previous major performers which have graced the Are You Listening? stages include IDLES, Ezra Furman, Shame, The Big Moon, Anna Meredith plus many more acts who are currently busy becoming the next big thing.

Taking advantage of Readings many hot spots, Are You Listening? explodes across the city’s best venues on Saturday 25th of April 2020 and promises to be a truly unmissable day for those serious about enjoying live music.

Are You Listening? also raises money for the local Learning Disability charity Reading Mencap, and so far has succeeded in amassing almost £70,000 since 2013.

This year, Are You Listening? is expected to reach even greater heights by continuing to bring you awesome performing acts, special activities and even more venues are coming onboard to make the festival bigger and better as organiser Dave Maul explains:

“We’re really pleased to have made it to our eighth year and we’re excited to reveal that we have an intimate new venue, the gorgeous cinema in the Grade II-listed Forbury Roseate Hotel, which should be really magical .This first announcement is probably our best yet and we’ve still got lots up our sleeve to add to this already impressive list of great bands”

Are You Listening? Festival tickets are currently available.

Are You Listening? festival has just made it’s first wave of announced acts playing in 2020 and we cannot wait. Here’s Gigantic’s top picks of who to see next year!

Wild piano-based rocker BC Camplight is riding high after the release of his latest critically acclaimed LP ‘Desperation Blues’ which tackles both the personal and the political with some truly catchy tunes. Always amazing live and certain to be an incredible set!

Three is a magic number and raucous punk rock trio Dream Wife are just one of those perfect bands. Despite only realising their eponymously titled debut album last year which is a joyous riot of guitar riffs, they have already established themselves as one of the most important young acts on the rise.

Stripping it down to the absolute basics to create an unrelenting barrage of post hardcore; you are certainly not going to forget the name JOHN. They release their stunning second LP ‘Out Here On The Fringes’ just last month to become a late contender for album-of-the-year.

Dream Nails are bringing back the ferocious spirit of riot grrl for a new generation and its proving to be contagious as the London based band pack out venues right across the UK and have built an international fanbase. Make sure you check out debut album ‘Take Up Space’ and feel the righteous rage!

Freestylers never fail to get your body moving! The British breakbeat legends first formed in the late 90’s to explode in the following decade to become an essential live act plus produce killer tracks for the club dance floor.

Uh oh – here comes trouble! Heavy Lungs are the rampaging garage rock fourpiece from Bristol who have established themselves as the act that makes every festival explode. Sure to start the mosh pit, make sure you get to the front and go crazy – we’ll see you there!

Are You Listening? Festival tickets are currently available.