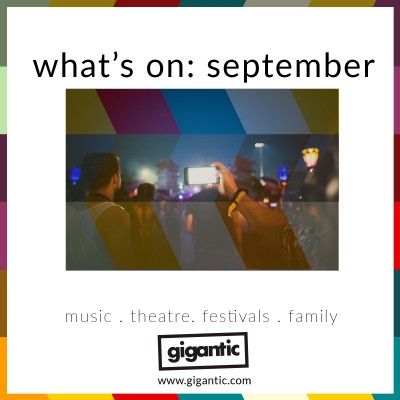 The summer may be over, but the fun still continues in September with Gigantic! As the evenings cool and we fondly remember all the fun of the festivals, our attention is now drawn indoors as bands kick off their awesome tours and popstars play their stellar shows to massive audiences. Plus, there are so many promoters coming up with new and intriguing ideas of how to have a good time.

You know Gigantic always has the best tickets for the hottest acts and the most exciting events. So, keep scrolling to browse through our guide to your essential September.

From her early days as our favourite soap star to her ever changing styles and sound, the enduring appeal of Kylie Minogue has never wavered, and she remains as vital as ever. This year has seen the release of her fourteenth studio album ‘Golden’ which fused upbeat dance, country and Latino to top the charts.

The Pop Princess takes ‘Golden’ on the road this month with the extensive arena tour carrying on right through until October. Do not miss your chance to see her perform on a stage near you!

Led by Jason Pierce, the sound of Spiritualized ranges from the endearingly tender to bombastic rock or just full on trippy and they have long been the go to band for all your out of this world experiences.

After six long years, Spiritualized are back with their brand-new album ‘And Nothing Hurt’ and they celebrate the release with a vital London gig at Eventim Apollo on Friday 21st of September. Tickets are going fast so book yours today!

The Village Screen finds the most apt and intriguing places to present all your favourite cult films. This September sees The Village Screen adapt the luxurious Kenwood Hall Hotel for a screening of Wes Anderson’s modern classic; The Grand Budapest Hotel. The film starts in the 60’s in the deserted and near dilapidated titular hotel, as the only remaining worker recounts his tale of the decadent interwar years and the fantastical story of the ever so charming concierge M. Gustave.

Southbeats is the massive Kentish all day music festival bringing you the very best DJs and producers in dance, drum and bass, grime and techno. The past two years have sold out quickly, seeing 12,000 revellers rave out at Port Lympe.

This year, the line up includes headliners DJ Ez, Andy C and MK plus further slots from the likes of Bugzy Malone, Wilkinson plus many more!

Looking for that special new taste? Derby Beer Convention is the perfect place to sample a wide range of the most satisfying stouts, beers and ales plus ciders too! Uniting a wide range of local and nearby brewers with enthusiasts from across the UK, you will be offered an almost endless palate of fine drinks to choose from.

So, choose your slot and come to Bustler Monthly Food Market in Derby on Friday 21st and Saturday 22nd of September look forward to quenching your thirst and discovering something sublime.