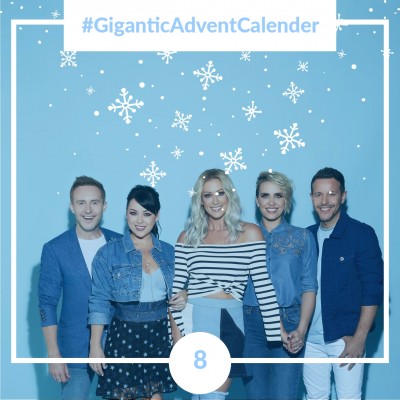 Kicking off the second week of our #GiganticAdventCalendar and we find stunning popstars Steps behind Door 8.

Having recently returned with their stunning new album ‘Tears In The Dancefloor’ and selling out their accompanying arena tour, the high energy quintet are will once again dazzle and amaze with their incredible Grandslam 2018: Summer Of Steps Tour.

Keep checking Gigantic to read our insightful interview with the pop group which will be on our news page very soon!

They also feature at the Greenwich Summer Sessions and Kew The Music, both held in London during July.

Door 9 of the #GiganticAdventCalendar looks to a sizzling summer in Sheffield for Tramlines.

Metropolitan festival Tramlines is a big weekender famed for uniting world class headliners with essential cutting-edge acts and is a real must for any real music fan. Crossing genres and rounding up a roster which spans from rob to dubstep, folk to techno and beyond – Tramlines never fails to thrill.

Door 10 of the #GiganticAdventCalendar is perfect for any avid followers of Strictly Come Dancing.

The live production of Strictly Come Dancing brings all the action of the smash hit BBC 1 TV series to the rink, enabling you to get up close and see just how impressive their daredevil routines really are. Tickets never last long so book yours before they all go!

Get your air guitars out for Stone Free Festival behind Door 11 of the #GiganticAdventCalendar.

Fans of classic rock do not have to look much further than Stone Free Festival. The massive event sees Hannover heavy rockers Scorpions supported by the one and only Megadeath on Saturday 16th, then pioneering prog rock band Yes play a headline set on Sunday 17th of June at The O2 Arena in London.

Door 12 of the #GiganticAdventCalendar brings you Beat The Streets.

Winter can be a hard time, especially for the most vulnerable. Beat The Streets is a one day music festival spread across a multitude of Nottingham venues aiming to raise money and awareness about the plight of the homeless.

Beat The Streets features more the 80 bands spread over ten stages which takes place on Sunday 28th of January extending late into the night.

Lucky for some, Door 13 of the #GiganticAdventCalendar brings you emotive Norwegian band a-ha.

Embarking on their ‘Electric Summer Tour’ throughout June of 2018, electronic pop trio a-ha play classic hits from the 80’s and more to the delight of long term fans plus a new generation discovering their music.

We spoke to Magne Furuholmen of a-ha about their upcoming tour, the band’s early influences and their currently work. Click HERE to read the interview.

Bringing together some of the very biggest names in showbusiness to Hyde Park in London; Barclaycard presents British Summertime Hyde Park are the huge outdoor shows which make up some of the best music events of the year.