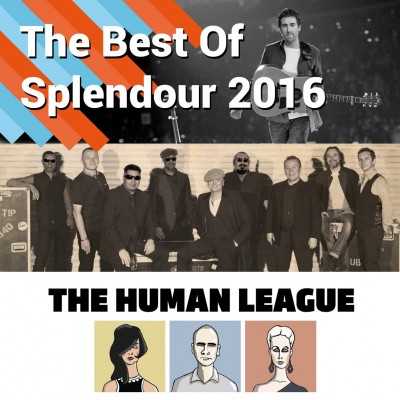 Having just passed, people are still talking about the fantastic Splendour Festival. The sold out event saw the audience of 23,000 treated to such stunning acts as Jess Glynne, The Darkness and Ady Sulieman who performed on the beautiful grounds of Wollaton Park at Nottingham.

But the action doesn’t need to end there as a number of sizzling Splendour favs are about to play at a stage near you!

Ultimate new wave band The Human League played a set that drew heavily on their classic synthpop album Dare. Their live performance included Love Action (I Believe In Love), Don’t You Want Me and Together In Electric Dreams.

The Sheffield trio will be setting of on A Very British Synthesizer Tour towards the end of the year. Tickets will go fast so book today!

Top British reggae band UB40 wowed the crowds at Splendour with their classic hits including Red Red Wine and I Can’t Help Falling In Love With You. With huge charisma and the energy to match, the band had the entire audience dancing.

This Autumn sees them embark on a huge tour of the UK where you can hear these signature songs, plus many more!

Crowds flocked to see singer-songwriter Jamie Lawson perform on the main stage. The Devonshire charmer chimed with audiences who loved his easy going hits such as Wasn’t Expecting That.

The acoustic balladeer will be playing a whole host of great headline dates in October.

The Fratellis are celebrating the 10th anniversary of their debut album Costello Music. The Glasgow band shot to fame with their signature song Chelsea Dagger as featured on the record which helped them win Best British Breakthrough Act at the 2007 BRIT Awards.

Join in the party and see them play live!

With the imminent release of their new album Lost Property the band will be touring the new material to promote the record.

Audiences at Splendour were treated to a fantastic set from Chingford wonders The Rifles which included hit singles Local Boy, Minute Mile and Heebie Jeebies.
The indie band will continue the good times when they tour this Autumn.

He plays a handful of special headline dates later this year that must not be missed.