The definitive sound of indie pop; Glasgow band Belle & Sebastian are at once twee and torrid, with an upbeat 60’s inspired sound underplaying dark lyrics that talk of sex and everyday desperation. Following the release of live album What to Look for in Summer, they announce a major tour kicking off in February 2022.

Inspired by the likes of Orange Juice, Felt, The Vaselines and Talking Heads, Belle and Sebastian was formed by Stuart Murdoch and Stuart David as part of a program for unemployed musicians. Their unique juxtaposition of a safe sound yet unsettling themes marked them out in the indie scene, and soon found them a home on such iconic labels as Jeepster, Rough Trade and Matador, releasing such cult records and acclaimed albums as Tigermilk, The Boy With The Arab Strap, The Life Pursuit and Write About Love. Adored by the critics, in 1999 they were named Best Newcomer at the BRIT Awards, in 2014 were given the Outstanding Contribution To Music NME Award and have even received Grammy and Mercury nominations.

This year, Belle & Sebastian will be back on tour playing a huge amount of headline dates all around the U.K. Sure to impress hardcore fans and casual listeners alike, the shows will incorporate songs form right across their career and tickets can be yours from Gigantic when you book HERE.

Whilst every true fan knows they take their name from Cécile Aubry’s 1966 novel Belle et Sébastien, which was later adapted into a cult French kids TV show, you may not know how frequently the Glasgow gang's music has been adopted for both the big and small screen. Keep scrolling to discover more!

Channel 4 comedy Teachers was the irreverent show set in a comprehensive secondary school which first hit screens back in 2001. Starring a fresh-faced Andrew Lincoln who had recently impressed on celebrated BBC drama This Life and was yet to face down zombies in The Walking Dead; it became essential viewing with every episode ending with Belle & Sebastian’s greatest anthem “The Boy With Arab Strap”. 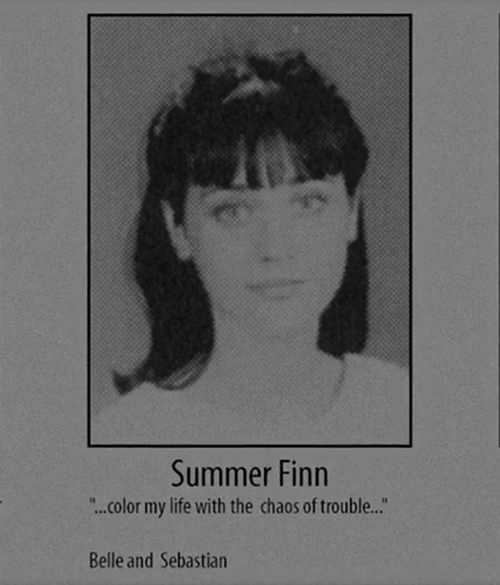 Whilst it may not actually be the song, lyrics from “The Boy With Arab Strap” also features in classic Joseph Gordon-Levitt / Zooey Deschane rom-com 500 Days of Summer. The line “Color my life with the chaos of trouble” (affected with an American accent, of course) can be seen in Summer Finn’s (aka Deschane) yearbook, inspiring many tattoos and even more memes from people who probably have never even heard the song.

Renowned satirical director Todd Solondz selected Belle & Sebastian as the perfect partners to score his 2001 film Storytelling. Though the relationship between band and Solondz would sour, the fifth studio album would be entirely wrapped around the film making process – albeit with only six minutes of their music actually making it into the movie.

Jack Black’s character Barry Judd is clearly not a fan of B&S track “Seymour Stein” in cult John Cusack film High Fidelity. Taking its title from the inadvertently hilariously named co-founder of Sire Records, Judd clearly has no time for the sensitive song and immediately switches it off for Katrina & The Waves “Walking On Sunshine” instead.

The Way He Looks

"There's Too Much Love" is the central song played throughout the Brazilian coming of age film The Way He Looks. Written and co-produced by Daniel Ribeiro, the film took home the Teddy Award for best LGBT-themed feature and the FIPRESCI Prize for best feature film in the Panorama section at the 64th Berlin International Film Festival, with Belle & Sebastian perfectly articulating the highs and lows of young love.