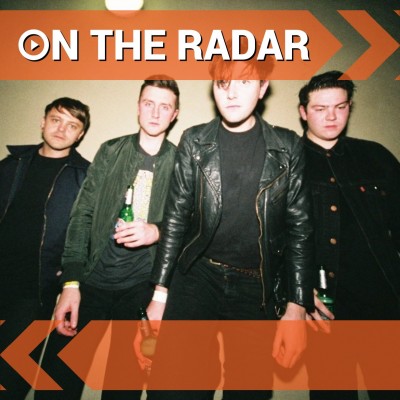 Screaming into the mic and tearing into rampant guitar riffs, Life produce a relentless barrage of garage punk akin to an amphetamine fuelled rage, spitting out political slogans whilst channelling the energy of their anger into a sound that ignites disco floors and sees venues fly into a frenzy at every gig.

Their momentum began to build after being champion by the likes of Steve Lamacq on BBC 6 Music and passed them on to Annie Mac, Huw Stephens and Zane Lowe who have all also given them prominent airplay. More recently Life were personally picked by punk terrible twosome Slaves to support them on their tour for second album Take Control.

Following the release of their killer songs Go Go Go and Popular Music, the fierce fourpiece are back with new track Euromillions. Released just last week, the song takes a slightly slower tempo than their usual sound but packs no less a punch. Tackling the rise of racism as its accepted into mainstream politics in Britain (“Little England dragon slayer bulldog”) and America (“Red neck racist eagle”), the dub declaration of anger sees the band burst the bubble of white privilege.

The band embody the independent attitude of their hometown Hull. A city with the spirit of the underdog that has too often been talked down and ignored and yet has created its very own rich and diverse music scene centred around venues like The New Adelphi Club, The Polar Bear and Früit plus events put on by The Sesh. In typical fashion for the band adept to the odd soundbite they recently stated in an interview; “King Charles tried to take control of Hull, but we told him to fuck off”, referencing how the English Civil War against the King first sparked at the cities gates.

Currently all their releases have been self-released through their own imprint Afghan Moon and fans eagerly await the release of their debut album in May this year. They are also deeply intertwined with Warren Records. A Hull based not-for-profit music development project which has been offering vital services including a free recording studio to local artists for over 31 years plus providing other essential skills and much needed spaces to any fledgling musician. Life drummer Stewart Baxter and singer Mez Green both play an integral part in the organisation of Warren Records which is very in keeping with the band’s DIY everything attitude.

With a huge amount of diverse music acts with access to fantastic facilities combined with Hull’s independent spirit being applied to art, theatre, sculpture and more, it comes as little surprise it has been appointed the title City Of Culture for the next twelve months. So, having absolute control of their own destiny whilst being based in the heart of a fertile music scene that is just starting to get the wider exposure it deserves we expect that this won’t just be their hometown’s year, but 2017 will be the year Life explode.

Harmonious guitar band Blaenavon are awash with gorgeous melodies and their heartfelt vocals are fast touching audiences everywhere. A trio, drummer Harris McMillan, singer Ben Gregory playing guitar and bassist Frank Wright produce music which tugs at the heartstrings with songs of yearning whilst inviting the listener to dance.

Blaenavon have continued to impress with each successive release, which includes the double A-Side single Into The Night / Denim Patches and the two extended plays Koso and Miss World.

Released this month, Orthodox Man is the new single taken from their upcoming debut album That’s Your Lot. Directed by New York based film maker Francesca Consarino, the gorgeous promo video jumps between lush expensive footage of the band and scratty home video style shots to combine to become a microcosm of the experience of a band on the rise. Clearly radio friendly with plenty of pop potential, Orthodox Man gives us a taste of an album which is sure to be one of the year’s must haves. That’s Your Lot comes out on 7th of April through Transgressive Records.

The trio have just announced a tour for the new year. This Spring sees them hitting some of the coolest clubs and venues around so make sure you get to their gigs and hear them play the new material live and discover just why everyone is getting so excited!