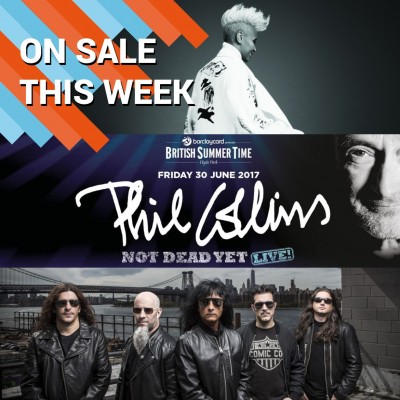 Multi instrumental mega star Emeli Sande has been certified multi-platinum after selling multi million copies of her award winning records. One of the greatest talents produced this generation, she performed at the opening and closing ceremonies of the 2012 London Olympics.

Following her recent tour of intimate shows which entirely sold out in just 9 minutes, she has announced new dates for March 2017. The upcoming shows follow the release of her amazing new album Long Live The Angels.

The long awaited return of Phil Collins is almost over. Despite selling over 150 million records worldwide, scooping just about every award there is and being one of the most highly respected contemporary musicians, Collins made the decision to retire from the limelight some years ago.

His return is celebrated by a huge concert at Hyde Park on Friday 30th of June where he will play host to a spectacular array of support acts and a vast amount of expectant fans. With tickets nearly all gone, don’t miss out and book today!

Irrepressible cheeky popstar Robbie Williams is back with brand new album The Heavy Entertainment Show. Following his early years in ultimate boy band Take That, Robbie struck out on his own to become a bit of an indie kid before becoming a huge showstopper.

Mr Entertainment himself will celebrate his return with ‘The Heavy Entertainment Show Tour’ which takes him the length and breadth of the land bringing his extraordinary live performance to a stage near you. Tickets are selling fast!

Get ready for some serious action because New York thrash metal band Anthrax are performing their breakthrough album Among The Living in its entirety live on tour. Hailed as a heavy guitar classic, the album contains the huge smash hit singles Indians and the Judge Dredd inspired I Am The Law.

Since their inception in 1981, Anthrax have been at the fore of thrash and have enjoyed a career which has seen them sell over 10 million records and rampantly push forward the possibilities of hard rock through constant stylistic invention – including a partnership with hip hop renegrades Public Enemy.

Sheffield, a city known for its rich musical talent has a new band you need to know; The Sherlocks. The essential indie band have just announced a tour for 2017. With their highly anticpated tickets going on sale this Friday, now would be a good time to set your reminder with Gigantic preparing you for their release.

After finding fame with the intense hardcore band Gallows and hard rock group Pure Love, passionate frontman Frank Carter returns to the stage with Frank Carter & The Rattlesnakes. Touring in March of 2017, tickets will sell quickly after being released later this week.

There are fewer more prolific bands than grand post punk institution The Fall. After joining the line up for the CLUB.THE.MAMMOTH all dayer and agreeing to play support for Swans, The Fall have announced a January tour going on sale this Friday.

As ever, we have a great range of tickets about to come on sale for the most unmissable acts. Get your tickets for psyche monster King Gizzard & the Lizard Wizard, lofi pop sensation Sales, visceral noise rockers Idles and emerging folk rock heroes Big Thief.

Tickets grant you access to over 30 premier parties showcasing a staggering 120 international DJs housed at 12 venues and mountain stages over 7 exciting nights. You can bet on a wild time and more with street parties, paintball wars and a hot spa cinema!

East Midlands Chilli, Beer and Artisan Festival is the family friendly event on every foodies calendar, drawn to the great atmosphere and vast array of mouth-watering grub on offer.

Hosted by local legend Chillibob at his Nottinghamshire farm, the various stalls offer such gastric delights as firey chillis from around the world, the best in craft beers, quality cheeses and Italian ice cream – plus much more!

Witness the amazing synthesis of musical technology and natural industry for yourself when BE perform their stunning show live at St Mary’s Church in Nottingham. Combining the sound of a real working beehive streamed in real time with a performing orchestra to create a truly unique experience. The upcoming events were featured by Lauren Laverne on her BBC Radio 6 Music show and was featured in our BLOG.

Award winning jazz and neo soul singer Laura Mvula has enjoyed an illustrious career that has seen huge commercial success for her highly creative work as celebrated by the BRITS, MOBOs and at the Q Awards. See her perform live this November.

Gigantic always has plenty for the alternative ear. Selkirk indie band Frightened Rabbit hit the road for an Autumn / Winter tour to promote new record Painting Of A Panic Attack, ultra cool doom wave band Cold Cave play O2 Academy Islington in the new year and Jens Lekman has announced new dates. Plus get your tickets for insane metalcore band Attila before they are gone.