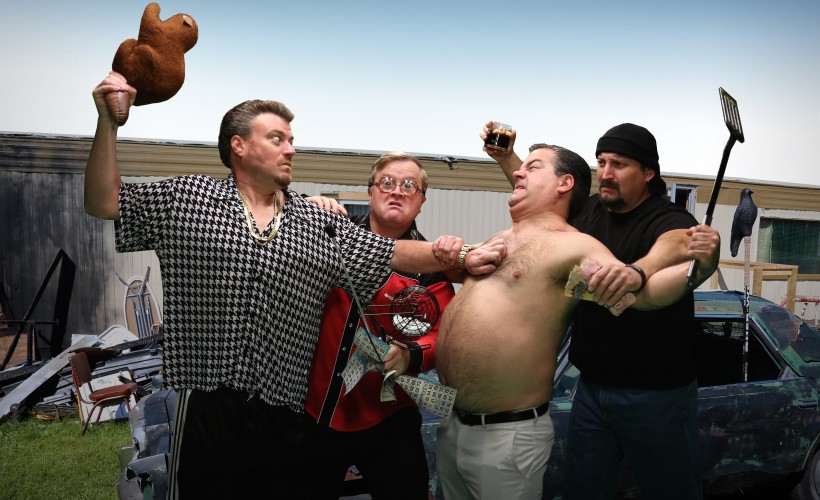 Trailer Park Boys are Canada's most beloved miscreants from a small town in Nova Scotia, Canada. They have been making audiences laugh for the past 18 years with their madcap antics and hilarious adventures on screen.

Robb Wells (Ricky), John Paul Tremblay (Julian) and Mike Smith (Bubbles) have created loyal and loveable characters for their television series and their message has spread globally. For nearly two decades “The Boys” have garnered plenty of positive press and gained a hardcore following of fans.

Now, Trailer Park Boys’ Ricky, Julian, Bubbles and Randy are coming to the UK in September with a brand new riotous live show that brings all the action and humour from the TV series to an army of audiences across the country.

Ricky, Julian and Bubbles have announced a return to the UK in December for their ‘Dear Santa Claus, Go F#ck Yourself Tour’, and they'll be joined by the very intoxicated Jim Lahey and his cheeseburgereating sidekick, Randy. When Bubbles tries to spread the true meaning of Christmas to the world, his good-hearted plans are botched by Julian cashing in on the festive season and Ricky’s relentless pursuit of the real Santa.

Verified purchase
Lived up to the name

Verified purchase
My life is complete

I never doubted for second that seeing the boys and Bobandy live would be enjoyable but holy fuck, this was amazing. Hilarious, pleasantly tasteless and left me feeling greasy. Lovely moment of appreciation for John Dunsworth and really heart warming to see so many beloved clips of him.

That's all we have for Trailer Park Boys! Check out their upcoming shows