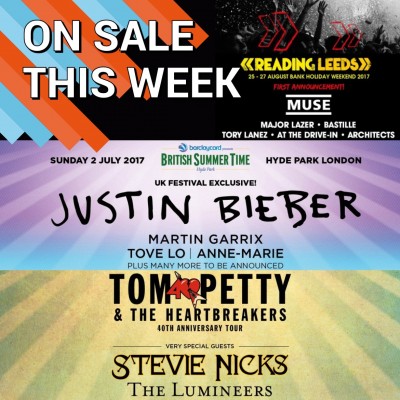 Barclaycard presents British Summer Time Hyde Park have just announced that the biggest pop star of the 21st century, Justin Bieber will be their fourth headliner. The global icon is the latest to be announced in a dazzling array of leading artists invited to make a headline performance.

Canadian singer Bieber shot to fame with the release of the single Baby. Since then he has taken home multiple BRIT and Grammy Awards in addition to the estimated 100 million records sold marking him as one of the most successful artists to recently emerge.

He will be joined by a huge list of amazing support acts including fellow international teen megastar Martin Garrix, Swedish sensation Tove Lo plus up and coming British talent Anne-Marie to add to an incredible day that is not to be missed.

Reading & Leeds Festival have always been the pinnacle occasion for all rock fans. The intense event offers a wild weekend at which time the two sites swap their performing artists ensuring all who attend share in the thrilling chaos.

Space rock veterans Muse have been announced to be the very first headliner of the weekend with other world class acts yet to be announced. They top a bill that also includes Andy C, Glass Animals, While She Sleeps, At The Dive-In plus many more yet to be announced.

Tom Petty first formed his supergroup The Heartbreakers in 1976, carefully selecting each member to create the perfect rock and roll band. They have explored a huge range of sounds and attracted a loyal international audience.

Click HERE for your Tom Petty & The Heartbreakers ticket.

Let’s Rock Bristol has a well earned reputation for being part of the ultimate retro festival by rounding up the best of the 80’s. This year sees them play the likes of Gloria Gaynor, Village People, Howard Jones, Kim Wilde, Tiffany and many more.

Madness are the very best of British ska. Having formed in North London during 1976, the band came to prominence with the ska revival led by their label 2 Tone in the late seventies and early eighties. They have grown from oddball outsiders to become one of Britain’s best loved bands. See them perform at the scorching summer event at Scarborough Open Air Theatre this August.

Camden Rocks is an amazing showcase of incredible rising stars and iconic acts. The day festival brings 250 bands across 25 premier venues and is known for playing host to some of the most exciting performances of the year. With Early Bird tickets now on sale, book your ticket at an extra special low price before they are all gone!

Impassioned punk three piece The Virginmarys exploded out of Macclesfield in 2009. They were named Best Breakthrough Act and were nominated for Album Of The Year at the 2013 Classic Rock Awards with the release of their debut King Of Conflict. They have announced new dates having released the follow up record Divides.

Other events on sale this week are: