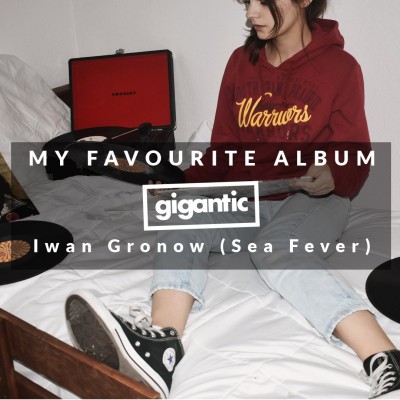 We are back with another instalment of My Favourite Album, and this time we are joined by Iwan Gronow of new indie-electro outfit Sea Fever!

This summer sees the release of their eagerly awaited debut Folding Lines. Sharing its name with a hypnotic title track and featuring the dark and atmospheric song “Crossed Wires” plus new single “De Facto”, Folding Lines is a compelling ten track statement from a vital new band.

Folding Lines is released on August 13th. CLICK HERE to pre-order \ pre-save. They celebrate their album with a launch party taking place at Night And Day in Manchester - tickets on sale with Gigantic HERE.

It’s Peter Green’s Fleetwood Mac, Greatest Hits. It’s a compilation of the bands hit singles. The album reminds of a certain time in my life.

Johnny introduced this album to me when I first moved up to Manchester from Cornwall.

I have so many good memories of listening to this album; either at rehearsals, at party’s or just on my own. I remember trying to learn the “Oh Well” intro riff; I imagine most musicians have tried the same, that’s the impact these songs had.

“The Green Manalishi” – Has a very simple start and creates tension building into a classic riff. Peter Greens voice is so menacing, the song weaves in and out. A great start to the album.

“Oh Well - Parts 1 and 2” – The intro blues riff needs no explanation, the vocals and lyrics are excellent pure grit. When the track moves into Part 2 it transforms into a classical  Spanish feel, beautiful songwriting.

“Rattlesnake Shake” – Is sheer attitude, a strident rhythm and powerful guitars “Baby, if you got to rock. I got to be your rockin’ horse”

“Man Of The World” – Was the last song he wrote for Fleetwood Mac before departing. A very personal song that shows the torment and beauty in Peter Green’s songwriting.

“Now when the day goes to sleep and the full moon looks. And the night is so black that the darkness cooks. And you come creeping around, making me do things I don't want to do” (“The Green Manalishi”)