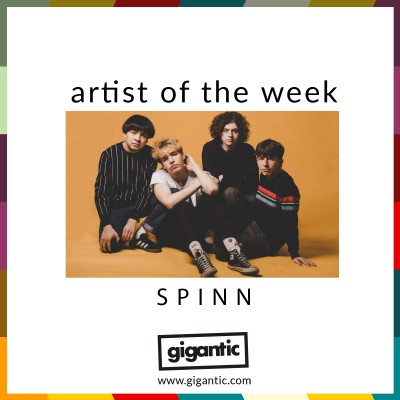 Raising the flag for anthemic guitar music, SPINN are the new indie icons ready to take over the world.

“Our aims when creating music are to create something hopefully enjoyable to our audience and for it to reach as many people as possible. The aim definitely stems from the feeling we get when we write a new banger and what it’s like when someone at a gig comes up to us and tell us they particularly enjoyed a song. That then leads to us recording it in the studio and getting more feedback from there.”

The Liverpool based fourpiece formed the band as teenagers in 2015, and with their fusion of the C86 jangly guitar sound and laid-back vibes quickly drew comparisons to indie icons The Stone Roses and cult dream pop favourites DIIV.

Their arrival came with the emotionally charged single “Green Eyes” followed by hazy banger “Bliss” which led to rave reviews from the likes of DORK and The Line Of Best Fit plus playing support for The Sherlocks on tour.

Their growing fanbase rallied around the release of their eponymously titled first record, which dropped in 2019. Deeply personal, their debut album delved deep into the real-life issues of singer Johnny. Transforming relatable strife and struggles into great anthems, the eleven anthems contained revealed a mature streak to the young band. Under closer investigation, radiant song “Keep Dancing” is revealed to be intensely introspective, and a personal favourite for the frontman;

“The lyrics are the most personal ones. It’s about me being the guy who keeps dancing when sometimes even happy-go-lucky Johnny gets a bit down. Sometimes I feel a bit like I have to portray that and that’s what that song’s about, and it’s important to have an outlet for such emotions. It’s about drawing the line between my public persona and the private one. Until we sell some albums, then I’ll actually moan ‘there’s so much pressure on me, man’. I’m just a doting artist, aren’t I?”

SPINN look forward to the future and have just announced a tour, which promises the possibility of hearing brand new material. Tickets are about to be released by Gigantic, so hit the links and set a personal reminder so you don't miss out on the launch.