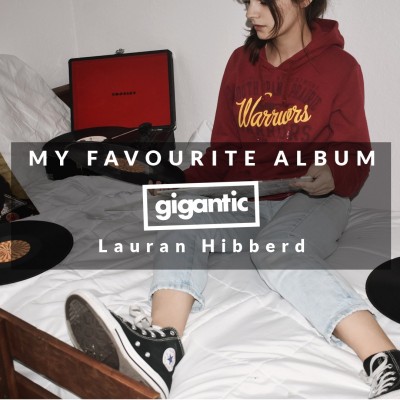 Gigantic reaches out to those that share our passion for music and speaks to essential performers and key figures in the industry to discover the sounds the inspire them. Today, My Favourite Album features rising slacker pop sensation Lauran Hibberd!

Recalling the spirit of riot grrl and bringing back the attitude of grunge, Isle Of Wight born pop punk songwriter Lauran Hibberd has quickly attracting widespread support from the likes of NME, DIY, CLASH, Gigwise and The Line Of Best Fit; drawing comparisons to such esteemed 90’s icons as Letters To Cleo, Veruca Salt and The Breeders.

This summer sees the release of her highly anticipated EP Goober which features her assertive  anthem “Boy Bye”. Also included is explosive single ‘How Am I Still Alive?’ which saw Hibberd team up with Lydia Night of LA punk band The Regrettes which has been getting some serious airplay on BBC Radio 1 thanks to Annie Mac and Jack Saunders.

Goober is released on July 30th and available on all digital platforms.

Lauran Hibberd  will be taking over Exchange in Bristol on Sunday 10th of October. Plus, she appears at awesome festival NEIGHBOURHOOD WEEKENDER which hits Victoria Park, Warrington from Friday 3rd till Sunday 5th of September and Weekend In The Park playing support for McFly. CLICK HERE to grab your tickets.

When I was 17 I started working with Boe Weaver who were producing my music at the time, I sort of when in with folk pop tracks and walked out obsessed with Rivers Cuomo. They played a few tracks to me to reference guitar sounds, and how we could incorporate a rockier edge to my songs etc. I just point blank fell in love with Weezer.

I think it signifies a real turning point for me musically, this was really when i discovered why I wanted to be an artist. Weezer made me think of my music as a life choice instead of a hobby. It was my biggest ‘I wish I’d wrote that’ moment ever. I think being 17 and playing power chords made me feel like I was someone else. There’s something really nostalgic and relatable about the album for me, and it really shaped what I went on to create from that point and is a constant influence still. I guess it made me feel normal. (Free therapy)

My favourite song on the album is “In The Garage”. I was a crazy shy kid and I really got lost in this song lyrically. It kind of trashes loneliness and the explores the power of surrounding yourself with the things you love without judgement or any need for human interaction. Rivers talks about playing dungeons and dragons, having posters of Kiss on the wall and writing his own stupid songs for no one else to hear.

This album made me laugh, and that had never happened to me before. It was a great feeling and oddly made me feel connected by sharing a similar humour and can make you feel part of it - especially as a needy 17 y/o. The first song I ever played live was a cover of “Say It Ain’t So” at a local football club so that will always stick with me.

“The World Has Turned And Left Me Here” is a favourite of mine lyrically: ‘I talked for hours to your wallet photograph, and you just listened. You laughed enchanted by intellect or maybe you didn’t.’ I love how Rivers make the loneliest and saddest situations a comedy. I think I’ve learned to laugh at myself in my own songs because of how he writes. He made it ‘cool’ to be the unpopular kid at school.

I named my dog ‘Jonas’ after the track “My Name Is Jonas” and only know who Buddy Holly and Mary Tyler Moore are because of the song.

It’s a big guitar album for me, in a world of electronic and midi keyboards and stuff I just became obsessed the rawness of the album. You might find a lot of Weezer nods in my tracks.