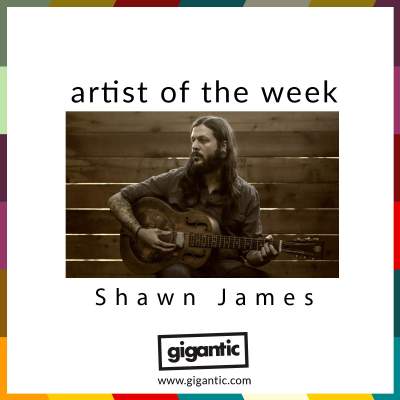 Combing blues and folk, the very soul of Shawn James can be heard through his raw music, often performing solo or with his band The Shapeshifters. World famous, each passionate performance exhibits a tremendous talent which is wonderous to behold.

Following on from the release of his stripped-down record The Guardian Collection, James now announces a UK tour, playing headline dates in October.

"You do need to hear Shawn James sing. Vocally, he has few, if any peers.” - Glide Magazine

Chicago-born singer-songwriter Shawn James had studied in in Florida to become a sound engineer before moving to Nashville; home of country and Americana. There, he began performing open mic nights and developed his own unique style before small live audiences then later busked around Arkansas. He returned home to Chicago after his young sister was diagnosed with thyroid cancer and continued to play after she won her struggle.

Drawing on the lessons he had learnt in Nashville, he entered the studio and recorded debut album Shadows and then teamed up with his very own backing band The Shapeshifters. With whom he has recorded subsequent albums Deliverance, On the Shoulders of Giants and The Dark & The Light.

James shot to worldwide attention when his track "Through the Valley" was picked to become the soundtrack to the trailer of hit Playstation game The Last Of US 2, which has since been streamed a staggering 3 million times on Spotify.

Last year also saw the release of a very special acoustic record; James’ The Guardian Collection which exhibited stripped down reworkings of tracks from his previous album plus covers. Included is his very unique version of fabled Texan songwriter Townes Van Zandt’s “Rake”.

“Rake, although not one of his more popular songs, has always been my favorite by Townes Van Zandt. There’s something about the sorrowful reminiscing lyrics comparing his current self to who he was that provides context to the haunting tone and delivery of the performance that always hit me differently.”

Fans of Shawn James are thrilled to hear of his headline tour, as the sensational songwriter plays dates all around the U.K. in October. Tickets are on sale with Gigantic and already selling out very quickly. Hit the links below and book your ticket before they all go!