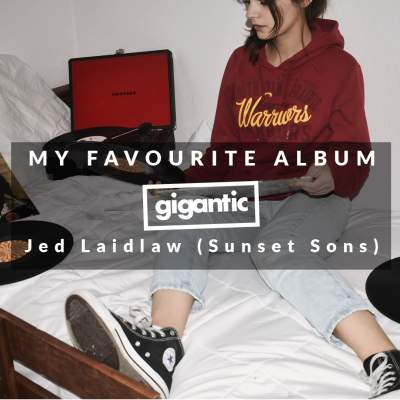 Joining Gigantic for a special edition of My Favourite Album, we are very pleased to be joined by Jed Laidlaw – drummer of incredible indie rock trio Sunset Sons!

Born out of the southwestern French surfing scene in Hossegor, Jed formed Sunset Sons after a chance meeting with singer Rory Williams at a bar. Combining with bassist Pete Harper, they captured the beachside romance of their lifestyle and soon attracted widespread critical approval which saw them nominated for an AIM Award for Best Live Act.

After earning regular rotation on BBC Radio 1, Radio X and Absolute Radio, they released debut album Very Rarely Say Die in 2016 to huge acclaim. They followed up three years later with second LP Blood Rush Déjà Vu which was another huge hit for the boys, thanks in part for the genius move to team up with renowned producer Catherine Marks who became a Grammy nominee for her work with Wolf Alice.

Currently working on their highly anticipated third album which expects to drop later this year, Sunset Sons are expected to take a more experimental direction as indicated by new singles “Smile”, “Rum & Coca Loca” plus their latest offering “Can’t Explain” which shot straight to No.8 on Amazon’s Fresh New Indie Chart.

Showing every sign of producing their best album yet, we speak to Jed ahead of the upcoming release about the record he always returns to for inspiration.

My Dad would play it all the time in the car when I was a kid when we used to go on family holidays and stuff. We had a few that were on heavy rotation, but this is the one I remember the most. It really set me on my path musically and still resonates with me now, just a collection of great lyrics and melodies. It’s chilled out and urgent all at once.

It’s mad because I forgot about it for a while but then I was reading an interview with Rick Rubin and he was saying how it was Full Moon Fever that turned him on to Tom Petty in the first place. And for me it was the same. It was the only Petty album I knew until I was in my 20s and then I went back and discovered all the Heartbreakers records and everything. There’s not a bad song on there and I love the Jeff Lynne production and the harmonies and how the songs are so simple and direct. They’re the hardest songs to write. The ones that seem like they took 5 minutes but never do. To sound so effortless is where the magic really is.

Even though “Free Fallin” has been played to death I still love it, must be the most simple but effective chorus ever. I love how the melody in the chorus works with the sentiment. It’s goes up with “I’m free” and cracks and back down “free falling”. Like he’s a little unsure about all this newfound freedom. And there’s just one harmony in the song just on the line “All the Vampires move west down ‘Ventura Boulevard”. That’s so disciplined in the production just to be so minimal and to give the songs little moments is brilliant to me.

“I Won’t Back Down” is just a perfect pop song.  (I’m worried I’ll just say that about every tune). I love the cool defiant lyric and the “Hey baby” Beatles harmonies.

One thing I’ve always loved as a drummer is how simple the drums are on the record. Nothing is ever overplayed. Just lush grooves to let the tunes breathe. Not too many daft fills etc.

“Out of a dream.. out of the sky.. into my heart.. into my life” is a line I’ve always liked on “A Face In The Crowd’. If anyone else sang that it would be super cringe, but Tom could just drawl anything, and it would resonate with me.

“Running Down A Dream” has the best riff and is the best driving song in history! Fact! “The trees went by.. me and Del were singing”. It took me years to realise he was talking about Del Shannon on the radio and not his girlfriend sitting beside him. There’s a nod to Elvis in “Free Fallin” too.

Also how cool is the little narrated part in the middle of the album? Just to make sure you’re paying attention. When Petty instructs the people listening on cd to pause while the others with cassettes and vinyls turn their records over. So good.

“Now he’s got nothing.. Head in the oven”, “You're so bad.. best thing I’ve ever had”. “You’re So Bad” is still something me and Henry sing to each other in the van. Trying to decide which is the best way to go and why the bad is always so alluring. And also, just another great pop song! The little drum break at the end is genius.

I could go on forever but there’s a line in “A Mind With A Heart Of It’s Own” that goes “I’ve been over to your house.. you’ve been over sometimes to my house... I’ve slept in your tree house.. my middle name is Earl” which is my favourite line on the whole record. And I think it’s just because of how’s it’s delivered. I don’t know if Earl was even his middle name but it’s fucking brilliant!

So yesterday I went to the Flea Market at the Rose Bowl in LA and it was under duress as my lady made me get up at 5am so we would ‘get the bargains’. Anyway, after initially hating the whole thing I ended up finding the best little stall with old cassettes which I can play in my old 420 Mercedes here. There was Full Moon Fever and I managed to haggle the guy down from 20 bucks to 5 when I showed him my bastardised Zevon Petty tattoo. Job done.