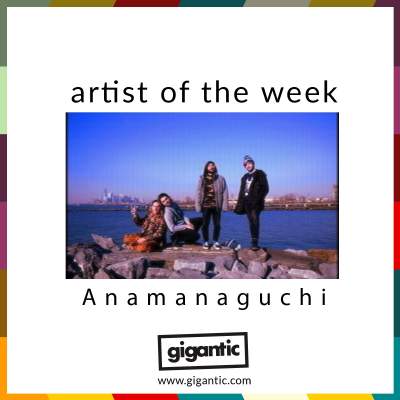 Their members include drummer Luke Silas, bassist James Devito, plus guitarists Ary Warnaar and Pete Berkman who both write the tracks.

Anamanaguchi formed in 2004 whilst Berkman and Devito were studying in Chappaqua, New York. There they would soon find themselves enmeshed in the retrofuturist  scene created by the 8bitpeoples collective which takes the sound of 80’s gaming and transform it into truly impressive music performances. Taking further influence from such pop punk greats as Weezer and the remarkable innovation of surf pop legends the Beach Boys, Anamanaguchi put themselves at the forefront of this new style and began to develop an international audience.

Touring their native U.S. and then hitting the U.K., their cult status was already established when they dropped their debut album Dawn Metropolis for free through their website. By 2009, they were so renowned that major video game company Ubisoft tasked them with creating the soundtrack to Scott Pilgrim vs. the World: The Game, a beat ‘em based on the hit comics from Bryan Lee O'Malley, which also shot to number 3 on the Billboard Heatseekers chart when released as an album.

Having proven that mainstream success on their own terms was possible, the boys signed with revered indie label Alcopop! before creating a Kickstarter campaign to fund their second album – reaching their goal of $50,000 in just eleven hours! Resulting record Endless Fantasy was also a tremendous success, hitting No. 1 on Billboard's Heatseekers Albums chart – and No. 2 in Dance/Electronic Albums! It was followed by a third self-released LP [USA] in 2019 which continued their rise, hitting No. 7 in the indie charts.

This year has already seen the release of their unique re-working of American Football’s emo anthem Stay Home as a chiptune cover. Join Anamanaguchi when they return to the UK to tour this summer, tickets for their headline shows are on sale with Gigantic right now!